A radio and television broadcaster, writer and corporate speaker

Meshel Laurie is a radio and television broadcaster, writer and corporate speaker of over 20 years’ experience.

Meshel is currently a regular panellist on Channel Ten’s 'The Project', and pops up quite a bit on TV, with numerous appearances throughout her career. Credits include 'Hughesy, We Have A Problem', host of 'ABC’s Stand Up!', co-hosting Ten’s 'This Week Live' and regular guest appearances on shows such as 'Rove Live', 'The Glass House', 'Can of Worms', 'Spicks and Specks', 'Good News Week', 'The Circle' and 'Adam Hills: In Gordon Street Tonight'. In 2018 Meshel travelled to South Sudan to experience the refugee crisis first-hand, for the fourth instalment of the ground-breaking documentary series 'Go Back To Where You Came From Live' for SBS.

Meshel is an established radio personality. From breakfast with Ash, Kip and Luttsy at Nova 106.9 Brisbane (which went on to become one of the highest rating shows in the state), to the national Drive show with Tim and Marty in 2011, back to breakfast with Tommy Little at Nova 100 in Melbourne in 2015 and most recently co-hosting the KIIS 101.1 breakfast show in Melbourne with Matt Tilley.

In 2013 Meshel released her first book titled 'The Fence-Painting Fortnight of Destiny', a memoir and an insider’s perspective on the 1990s comedy scene, the workings of an inner-city brothel, what it’s like to be ‘the girl on Rove’ and how fence-painting can help save a life. She followed it up in February 2017 with 'Buddhism For Breakups', which follows Meshel’s personal story and how Buddhism can be a roadmap for navigating the fear, loneliness and grief of a broken heart. Meshel’s third book and second in the ‘Buddhism For…’ series, 'Buddhism For The Unbelievably Busy', was released in November 2017 and explores how to juggle the demands of modern life, using her own experiences and drawing on her long and varied career. The third book in this series will be released in 2019. In September 2018 Meshel released her book 'Bad Buddhist', a collection of new and previously published writing. Later this year she will bring the book to life, touring the country with her stage show of the same name.

Meshel regularly writes columns and articles for The Age and Sydney Morning Herald. She presents the 'Nitty Gritty Committee' podcast, where she chats with former prison inmates, the homeless, transgender activists, homicide cops, famous people and non-famous (but amazing) people. Meshel also presents the 'Australian True Crime' podcast with Emily Webb – together with expert interviews with writers, victims, investigators and perpetrators, they probe the underbelly of our towns and suburbs and uncover the darkness at the heart of Australian life.

Buddhism is Meshel’s key to contentment, she puts her heart and soul into being a better Buddhist every day. She embraces her spiritualism by giving back to communities around the world. Meshel is proudly a board member of His Holiness the 14th Dalai Lama in Australia, and for Reconciliation Australia. 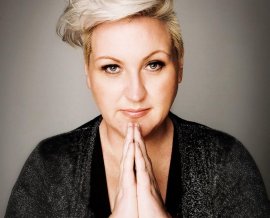