Merrick first came to Australia’s attention as part of the Triple J Drive show with Tim Ross as one half of Merrick and Rosso. In 2000 they were the first voices on the NOVA network, launching a new radio brand and coming first in Australia’s toughest radio market – Sydney Breakfast.

Merrick and Rosso built a cult-like fan base with sold out live shows across Australia and TV series’ on Ten, Nine and the Comedy Channel.

Over the last few years Merrick has branched out from the double act, demonstrating his versatility as both an actor and comedian. Merrick showed his acting chops with roles in Underbelly – The Tale of Two Cities; Working Dog’s Logie Award winning comedy-drama satire, The Hollowmen on ABC TV and as a favourite on the improv hit Thank God You’re Here (Seven Network/Network Ten).

There have also been numerous guest appearances in shows for all the major networks, including Are You Smarter Than a 5th Grader, The Spearman Experiment, Thanks for Listening – The History of Radio, Rove Live, Burke’s Backyard, All Saints, Harry’s Practice, and even Bert’s Family Feud!

After more than 10 years broadcasting his award winning breakfast radio show on Nova 969, Merrick has made the switch to Drive with Triple M hosting the very successful Merrick Watts and the Highway Patrol, which is broadcast nationally.

In 2013 we will see Merrick on our TV screens taking on the role of host for a new comedy quiz show for ABC1 called Tractor Monkeys. Merrick hosts alongside his team captains Dave O’Neil and Katie ‘Monty’ Diamond battling through quick fire rounds of questions and games inspired by ABC TV’s eclectic archive vault.

Underbelly – The Tale of Two Cities

In 2009, Merrick played the character “Mr Asia” (Marty Johnstone), business partner to Terry Clark in the second series of the highly successful Australian crime drama. But unfortunately, his life is cut short when Terry gives the order to kill him after believing Marty ripped him off. A very gruesome death scene at the hands of his best mate!

In 2008, Merrick played the character Nick, Senior Political Advisor in The Hollowmen, starring alongside Rob Sitch, Santo Cilauro, Lachy Hulme and Neil Melville to name a few. The Hollowmen is a comedy-drama satire produced by Working Dog Productions and set in the offices of the Central Policy Unit, a fictional political advisory unit personally set up by the Prime Minister to help him get re-elected.

Series 1 of The Hollowmen first broadcast on the ABC on 9 July 2008 (six half hour episodes), and due to its success, Series 2 followed immediately after. The series also won a TV Week Logie Award for Most Outstanding Comedy Program.

Merrick has made regular guest appearances on this consistently high rating series since its debut in 2006. The show is all about improvising - being able to bluff your way through any situation. Guests have no idea what to expect when they walk through a door to an unfamiliar setting and they have to think on their feet instantly! 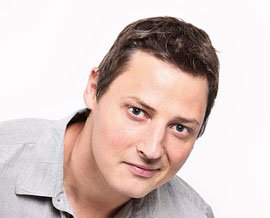