Taking the comedy world by storm

Melanie Bracewell is taking the comedy world by storm. She started comedy in 2014 as the winner of the 7 Days Comedy Apprentice competition and continued impressing audiences to win the 2015 Raw Comedy Quest.

Since then, Melanie has been in hot demand, performing at events including Rhythm and Vines, the Comedy Festival Gala filmed live for Three and in 2017 won the prestigious “Best Newcomer” award for her first solo show in the NZ International Comedy Festival. With goofy observations and natural stage charisma, Melanie is a master of anecdotes.  In 2018, Melanie won the famed Billy T Award and went on to make guest appearances on the hit Aussie game show “Have you Been Paying Attention?”.

Melanie spent 2 and a half years working as a full time writer for The Project NZ. She also appeared on the show in the 'comedy' seat, and as a roving reporter and interviewer.

Melanie is a regular panelist on Three’s hit show ‘7 Days’, does regular work for Radio Hauraki and works as a full time comedy writer and panelist for 'Have You Been Paying Attention NZ'. She has also worked on the hugely popular show 'Wellington Paranormal', a spin off from 'What We Do In The Shadows'. She worked on the storylines of all the episodes, and wrote two full episodes for the series. 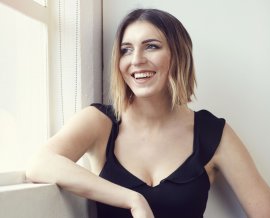