Ability to connect and set the right tone makes him a popular corporate MC.

With life experience as a window cleaner, customs officer, perfume salesman, stand-up comic, writer, actor, social commentator and an acclaimed performer in his own one-man show – Lawrence Mooney has an extraordinary talent for knowing what makes people tick. Currently hosting his own show on ABC2 ‘Dirty Laundry Live’ Thursdays at 9:30 pm.

Lawrence’s edgy humour and laconic charm make him a perfect fit as host of the new comedy game show ‘Dirty Laundry Live’ which premiered on ABC2 on May 17, 2013.

With an encyclopedic knowledge and quick wit, his sage advice on the prickly topic of women was a highlight of the ABC’s Agony Uncles and Agony Guide to Life.  His insightful one-man show ‘Lawrence of Suburbia’ won rave reviews at the 2012 Melbourne Comedy Festival and was featured in the Warehouse Comedy Festival broadcast for ABC2.

Winner of the Melbourne Fringe Best Comedy Award 2011, he also made it to the semi-final of the prestigious NBC’s Last Comic Standing in Los Angeles in 2007.

Lawrence is a familiar face on Australian television and featured regularly on Spicks and Specks, Can of Worms and as a regular Brains Trust member on The Einstein Factor. Lawrence was co-host of ABC TV’s exclusive coverage of the Paralympic Games London 2012. Lawrence was also seen on the controversial ABC2 interstitial series Kane and Disabled, playing the insensitive archetypal buffoon, Ernie Kane.

Some of his most recent acting performances have been in serious roles including The Cup, Seven Network’s Winners and Losers, Wentworth and Conspiracy 365 on Movie One.

On top of all that, Lawrence is in demand on radio as well.  He has hosted the drive time show on Macquarie Radio Network’s Melbourne Talk Radio, and was also a fill in host and regular on MTR’s Steve Vizard Show and ABC’s 774. Lawrence now does guest spots on Lindy Burns 774 evening show and Jane and Chrissie’s Mix FM breaky show.

Lawrence’s ability to connect with an audience and set the right tone for an event makes him a popular corporate MC.

Not a man to rest on his laurels, Loz is always developing ideas, concepts and scripts in collaboration with other performers – he’s not a man short of ideas or skill.

Lawrence, who was both the MC and entertainment at our 2018 Awards dinner, was outstanding on the night. He reads an audience beautifully and was able to both engage and delight them. He made our event memorable.

Lawrence was the perfect MC for our crowd, he was funny, professional, entertaining and a pleasure to deal with. 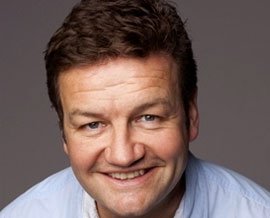