Since being discovered performing stand-up in a dingy Collingwood pub over 15 years ago, the warm and vibrant Jo Stanley has risen to become a household name—and for good reason!

Born and raised in Melbourne, Jo Stanley rose to fame in 2003 as one half of The Matt & Jo Show, the hilarious and heartwarming breakfast radio duo on Fox FM. Together with funnyman Matt Tilley, Jo enjoyed 10 successful years of breakfast radio—at their peak, the duo was the most listened-to radio show in the country, with a whopping 6 years at number one.

Eventually—perhaps feeling a little inspired by Queen Bey—Jo decided it was time to belt out some tunes herself. So, in 2007, she signed up for Channel Seven’s singing contest It Takes Two. Jo paired up with singer Anthony Callea, where the two battled it out against other Australian celebrities, and made it all the way to the show’s grand final. Jo and Anthony finished in an impressive second place, however Jo ultimately decided to stick to radio.

But in 2013, after a hugely successful decade on air, The Matt & Jo Show bid a fond farewell to their listeners, with their final breakfast show airing on November 29th, 2013. But of course, that wasn’t the end for Jo. Soon after The Matt & Jo Show, Jo returned to the microphone as co-host of Weekend Breakfast, broadcasting to 52 stations nationally, on Southern Cross Austereo’s Today Network. Two years later, in early 2016, she joined the breakfast team at GOLD 104.3, alongside Anthony ‘Lehmo’ Lehmann. Together, the pair hosted new morning radio show Jo & Lehmo for Breakfast. The on-air chemistry between Jo & Lehmo was clear to see with the show’s ratings growing consistently, culminating in the show rating the Number 1 FM breakfast show in Melbourne after the radio ratings survey results in November 2017- the best result for the station in over ten years. However, on the 9th December 2017, after an incredible 2 years on air, they said their final goodbyes to their listeners, but this certainly won’t be the last we hear from the duo with Jo confirming ‘there’ll be more exciting, fun and impactful things to come in the future’.

Aside from her vibrant career in radio, Jo has also appeared on several TV shows across various networks—including the ABC, Comedy Channel, Network Ten, Network Seven and the Nine Network. Over the years, Jo has graced our screens on shows like Channel Ten’s The Project, The Circle, Good News Week, The Panel and Australia’s Brainiest Quiz Show, as well as Channel 7’s SlideShow, Good as Gold, Thank God You’re Here, Sunday Brunch and Channel Nine’s Clever. Since December 2013, Jo can also be seen making regular appearances on Network Ten’s breakfast show, Studio 10. In December 2017 Jo joined the team at House of Wellness TV as presenter and occasional fill-in host, exploring the world of health and wellbeing, addressing your health concerns in an entertaining, interactive and informative format. 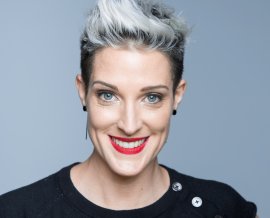