Frank Woodley has always has humour is his bones, and his combination of comedic skill with acting allowed him to become a nation-wide comedian.

In 2006, after spending 20 years in the much-loved and well-known comedy duo Lano and Woodley, Frank decided that it was time to say his goodbyes and begin his own solo career. The duo performed one more national tour, which took in 34 markets and sold over 125,000 tickets.

Since leaving the duo, Woodley has been busier than ever. His solo show ‘Possessed’ was a smash hit and played nation-wide and at the Edinburgh Fringe. He received full houses and admiring reviews of his performance. He then released an animated short titled ‘Chicken of God’ for which he received an AFI nomination. Frank also played the role of Candide in the Malthouse Theatre production of ‘Optimism’, and he won the coveted Herald Angel Award at the Edinburgh fringe.

In 2010, Woodley set out to do a solo comedy tour around Australia and his tickets for his show Bewilderbeest sold out quickly, which cemented his place as a great Australian comedian. His live comedic acts, which included singing and arm flailing, were popular with audiences. Two years later he came back to the stage with a new show titled Bemusement Park.

In 2012, as well as a successful stage show, Frank also released his very own television show titled ‘Woodley’, which he created, wrote, produced and starred in. The romantic comedy aired on ABC and starred Frank as the lead character alongside Justine Clarke and Alexandra Cashmere. The program led him to be nominated for an AACTA nomination for Best Performance in a Television Comedy.

A year later, Woodley went back to the live stage and together with Simon Yates, an acclaimed acrobat, ‘Inside’ was created. The two men star as clown brothers inside a prison and the show premiered at the 2013 Sydney Festival before touring Adelaide and Melbourne.

One of Australia’s greatest comedians, Frank Woodley is sure to entertain any audience with his performances and presentations. 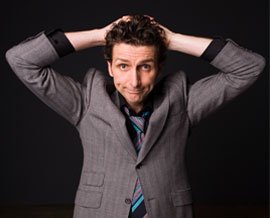