After moving to Australia on his own from Sri Lanka at the age of 19, Dilruk was well on his way toward making his parents proud by making good use of his finance and accounting degree.

However, in 2009 he was unceremoniously fired by one of the “Big Four” accounting firms. Just as Dilruk had, his managers noted that he had absolutely no interest in being a full-time accountant.

Dil then promptly jumped up for his first gig in September 2010 and hasn’t looked back since.

Now a regular on the Australian comedy circuit, you would be hard pressed to miss seeing Dil’s name on the bill at the best rooms around the country on an almost weekly basis. On top of being invited to perform all over the country, Dil has also toured internationally with headline spots in KL, Penang and Singapore. He’s performed at six Melbourne International Comedy Festivals and in 2017 returned with a completely sold-out, smash hit show The Art Of The Dil.

In 2016. Dilruk finally bought his first TV just in time to watch his Australian Television debut with his first appearance on Network Ten’s smash hit prime time show 'Have You Been Paying Attention?', which he has been a regular on since.

Dilruk has recorded an hour long special for the ABC and also appeared at the Sydney Opera House as part of the Just for Laughs festival, an appearance that was also broadcast on The Comedy Channel.

In 2017, Dilruk started his acting career becoming a regular on ABC TV’s awardwinning Utopia and starred as a team captain on brand new panel show CRAM for Network Ten, alongside fellow team captain Virginia Gay and host Peter Helliar. In 2018, Dilruk travelled across the nation with his show Bundle of Joy.

Dilruk is a regular for corporate functions and has done appearances for companies such as the Hawthorn Football Club, Pitcher Partners, Emerge Festival for Multicultural Arts Victoria, and The Moree NSW Multicultural Festival.

Dilruk starred in the 2020 season of Network 10’s ‘I’m a Celebrity.. Get Me Out Of Here’, where viewers and campmates alike were entertained by his humour.

​Submit an enquiry or contact us to book Dilruk Jayasinha for your next event. 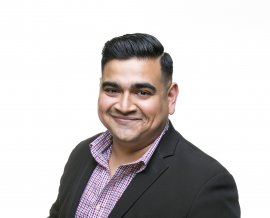