An unstoppable force on the live comedy scene

Starting her comedic career at the age of 15, Demi Lardner is an unstoppable force on the comedy circuit. With high-energy performance combined with perfectly timed wit, Demi has gained a following of fans.

In 2013, Demi was the national winner of Australia’s RAW Comedy, as well as earnt Adelaide Comedy’s Rising Starr Award for Best Newcomer. She was also the co-writer and director of ‘Wolf Creek, The Musical’, ‘ took home the Best Emerging Comedy Award Adelaide Fringe Festival in the same year.

In 2014, Demi was invited to perform at the Just for Laughs Festival in Montreal, and a year later debuted her first solo show at the Adelaide Fringe Festival.

Most recently, Demi was awarded the PINDER prize at the 2018 Melbourne International Comedy Festival for her latest comedic work ‘I Love Skeleton’.

Demi’s comedic skills are featured across all forms of media, as well as on her own podcast. 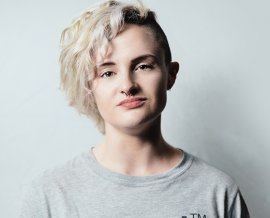