As a stand-up comedian and actor, David Quirk has a strong place in Australian entertainment. He has been seen on television screens and on-stage, with a comedy show that has been seen internationally.

David’s breakthrough show, ‘Shaking Hands with Danger’, tells the story of infidelity and won him the Piece of Wood Award at the Melbourne International Comedy Festival and a nomination for Best Comedy at the Sydney Comedy Festival. The show ran highly successful seasons in both London and Edinburgh.

In 2014, his show ‘Career Suicide’ also received fantastic reviews which aided David’s consolidation as an honest and daring stand-up comedian.

A year later, he premiered his show ‘Thrasher’, which was a pop-up show performed in a skateboard shop where David worked most of his adult life.

In 2016, his show ‘Approaching Perfection’ received rave reviews and toured both nationally and around the United Kingdom.

Aside from his two solo shows, David has also helped in the creation of two award-winning collaborations. ‘The Incident’, performed with Sam Simmons, won the 2010 Golden Gibbo Award at the Melbourne Comedy Festival. ‘Bunny’, which was written by Benjamin Cittadini and performed with Craig Peade, won the 2011 Innovation in Theatre Award at the Melbourne Fringe Festival.

David Quirk’s sense of humour makes for a great show, with audiences commending him on his hilarious personality and originality. 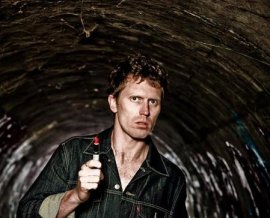