Dave’s most recent solo show, The Some Of All Parts, was a smash hit on the Australian comedy festival circuit.

With his accessible humour and free flowing style, Dave’s success as a comic has quickly broadened into a range of performance credits on TV, radio and stage.

Dave has been a guest on Network Ten’s Talkin’ ‘bout Your Generation a regular guest on Good News Week and he was seen on your screens in 2010 as a weekly panel member in the first season of Channel 7’s The White Room.  His stand-up has been televised on Good Morning Australia (Network Ten), the Melbourne Cup special of Stand-up Australia (The Comedy Channel), and Rove (Network Ten).

He hosted the first 3 seasons of Channel 31’s Studio A in Victoria seeing the show through to win ‘Best Live Show’ and ‘Most Outstanding Program of The Year’ at the 2009 Channel 31 Antenna Awards.  More recently, you would have seen him covering various stories and as a regular panel member on The Project, which has seen him interview the likes of Anne Hathaway, Owen Wilson, Jake Gyllenhall and Andy Murray.

His solo debut performance in at the 2007 Melbourne International Comedy Festival garnered a nomination for ‘Best Newcomer’ for his show Euromission and he has returned to the Comedy Festival each year since, with Info,Never Sweat, A Different Type of Normal and in 2011 with I Wanna Be Bruce Lee.

Following the success of these seasons, 2009 also saw his debut performance at the Edinburgh Fringe with Allow Me To Introduce Myself.   .Dave’s success and sell-out shows also saw him invited to the prestigious Just For Laughs festival in Montreal in 2010, before heading over for his second season at the Edinburgh Fringe with A Different Type of Normal and wrapping up his international touring for the year at the Nando’s Cape Town Comedy Festival in South Africa where he again performed in 2011. In 2012, Dave’s most recent solo show, The Some Of All Parts, has already been a smash hit on the Australian comedy festival circuit.

If he hasn’t been busy enough, his 2010 solo show, A Different Type of Normal has been released on DVD through Madman Entertainment and you can hear him each weekday across the country on the Today Network on his national radio show Mamamia Today with co-host Em Rusciano. 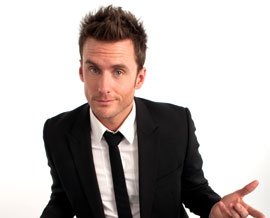