Dave’s laconic style thinly disguises one of the fastest comic minds this country has ever seen.

Dave Hughes is one of Australia’s most beloved personalities and his comedic attributes have made him a household name. From radio to television to stand up, there isn’t much Dave hasn’t done within Australian media. His personality and honesty has made him a favourite for corporate events to brighten up the occasion, and he is perfectly suited in an MC, host or comedian role.

In 1999, word began to spread about a laid-back guy whose truthfulness made for great entertainment. At the Melbourne Comedy festival, Dave was forced to move from a small city bar to a 300-seat room at Melbourne Town Hall to enable more audience members to attend his performance.

His popularity with audiences has never ceased and over the past five years, Hughesy has become one of the highest selling Australian comedy acts. In 2010, his Melbourne International Comedy Festival show ‘Retro’ was held over two nights and sold out at the Palais Theatre, which seats 3000. Two years later ‘The Comeback Tour’ sold out and he continues to sell out stand-up comedy shows, proving his impeccable talent as a comedian.

Aside from stand-up comedy, Dave has also been seen on Network Ten’s ‘Before the Game’ during the footy season, ‘The Project’ and is a guest on the comedy program ‘Have You Been Paying Attention’.

Dave teamed up with Kate Langbroek where their personalities combine to produce interesting conversations on the radio. Originally on Melbourne’s Nova 100, they can now be found on KIIS 101.1 between 4-6 weekdays.

Perfectly suited for any occasion or event, Dave Hughes is sure to bring his humorous personality to your event, leaving guests amused and entertained. 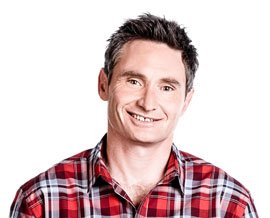