Recognised as Australia’s Number One Ventriloquists, Darren Carr’s performances are entertaining and hilarious. Holding a wide cast of hilarious characters, he has performed at numerous corporate functions, special events, nightclubs and theatres across the globe.

In 2013, Darren appeared on Australia’s Got Talent and made it through to the Semi Final 1, entertaining the judges and audiences alike. Combining ventriloquism, comedy and music, his perfectly timed and thoroughly entertaining performance is a treat for all audiences.

At the age of eight, he started playing with dolls and talking to himself. His behaviours were encouraged by those around him and aided in his success in ventriloquism.

Over the past ten years, his impeccable skills have been seen by audiences across the globe due to his appearance on many of the worlds top cruise lines including P&O, Princess, Celebrity, Silver Seas, Royal Caribbean and Holland America.

Darren has received numerous entertainment awards including several as ‘Australian Performer of the Year’. He has also appeared as headliner at the International Ventriloquist Convention in the USA and across television screens on Channel 9’s ‘Footy Show’, Comedy Channel’s ‘Stand Up Australia’ and CBS’ ’60 Minutes’.

Darren’s performance is sure to be remembered by your audience and makes the perfect addition to any event. 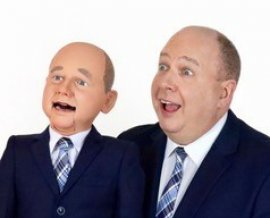