Bryan Dawe is a writer, performer and satirist who was told he would never amount to much.  His careers advisor scoffed at the thought of Dawe becoming a Barrister, writer, performer or director because of his background growing up in working class Port Adelaide in the 50’s and 60’s.  Bryan left school at the age of 15 and spent the next 25 years proving him wrong.  Performing on stage, radio and television, Dawe also wrote and directed.

His highly entertaining, funny yet melancholic story introduces his characters as he gives a humorous insight into Australian. Bruce McAvaney, another student from Woodville High would describe his appearance as “a VERY SPECIAL 45 minute talk”. 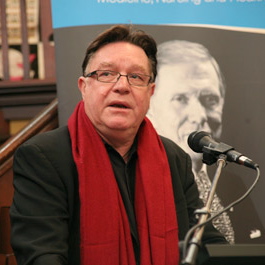