Bev Killick is from the bold and brassy school of stand up, delivering a non-stop energetic set every time. As soon as she blast’s her way on stage, you know you’re in for a treat. Bev is likeable, bawdy and real.

Bev Killick is from the bold and brassy school of stand up, delivering a non-stop energetic set every time. As soon as she blast’s her way on stage, you know you’re in for a treat. Bev is likeable, bawdy and real.

Bev started making people laugh from the age of ten, at family gatherings. Invariably these gatherings would end up with Bev putting on a show. Always the class clown and lunch time entertainer, Bev’s ability to remember a joke (handed down from her Dad at the meatworks) and tell it well , saw her doing Stand Up Comedy in the school quadrangle long before she knew that it would be her calling.

Bev’s move south to Melbourne was where her innate comedic abilities came to the fore. Participating in numerous performance workshops from clowning to improvisation, she perfected her Stand Up routine touring it around Melbourne, Sydney and Brisbane comedy circuits performing in top comedy spots such as The Espy, The Comedy Club, The Comic’s Lounge, The Comedy Store and the Sit Down Comedy Club. (She loved the Espy so much she married the Lighting Guy, who would give her extra special lighting during her sets).

Bev’s ability to get a crowd laughing non-stop each and every-time, came to the attention of the Producer’s of the worldwide sensation Puppetry of the Penis. They offered Bev the opportunity to travel with the show as their opening act. Bev jumped at the offer and travelled around Australia performing to more than 250,000 people.

For a while Bev’s life became all about boobs after she landed a role in the much-aired Berlei Ad for the Uplifting Tour of Australia as a result of this she was asked to perform as a Bosom Buddy in the hit show “Busting Out!” making audiences across the globe laugh their tits off as she got her tits out. Bev has appeared in many ad’s including Yellow Pages, Super of the Future, Herald Sun, Coopers Beer and Berri Juice to name a few. She has also voiced radio ads and characters most notably in the feature film “Little Johnny: The Movie” released in 2011.

Bev has worked with Weird Al Yankovic, Wayne Brady, Gina Riley and Jane Turner as a guest cameo on Kath and Kim. She was a panel member on Beauty and the Beast, featured comic on Stand Up Australia, a special guest on the hit show Pizza, married her Lighting Guy on Surprise Wedding, beat the blokes on Joker Poker, performed three solo shows at the Melbourne International Comedy Festival (Sic Women earned her a Green Room Award Nomination), was selected to perform in the prestigious female only “Up Front” gala and this year makes her Melbourne Comedy Festival Road Show debut. 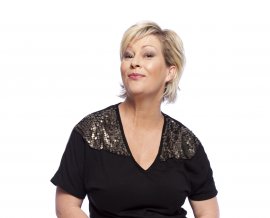