One of Australia’s most exciting stand-up, character and banjo-playing comedians

One of the nation’s most exciting comedians, Anne Edmonds is known for her stand-up, character and banjo-playing comedy. She burst onto the scene in 2010, bringing her exquisitely incisive characters, songs and worldview to clubs and comedy festivals around Australia and all over the world.

Winning a prestigious peer award at the 2015 Melbourne International Comedy Festival, Anne took her show 'You Know What I’m Like', to London’s Soho Theatre the year later. In the same year, she toured the country with her show ‘That’s Eddotainment', stole the show in ABC TV’s 'Fancy Boy' and won the 2016 MICF Director’s Choice Award in with the True Australian Patriots.

In 2017, Anne returned to London’s Soho Theatre, bringing her new show ‘No Offence, None Taken', which earnt her a nomination for the Barry Award. In the same year, Anne created, wrote and starred in ‘The Edge of the Bush’, debuting on ABC TV.

Anne has been seen on television screens across the nation, regularly appearing on Network Ten’s 'Have You Been Paying Attention?', 'The Project' and 'Hughesy We Have A Problem'. She also hosted the 2018 Melbourne International Comedy Festival Opening Night Gala.

Bringing her new show, ‘What’s Wrong With You?’ to comedy festivals in 2019, Anne brings a new wave of comedy to audiences around the country. 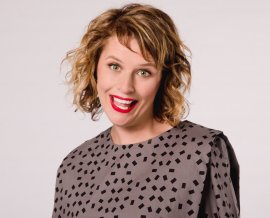