As one of Australia’s most respected, successful and popular comedians, Akmal Saleh will delight and entertain any audience he is put in front of.

With an incredibly fascinating past, Akmal immigrated to Australia from Egypt with his family nearly 30 years ago. Utilising his Arab heritage, Akmal steers his comedy to the issues of religion and honesty, whilst applying his signature comedic twist. With a gift like no other, he captures any audience’s attention immediately.

Akmal’s popularity has increased due to his regular appearances on programs including ‘Rove’, ‘The Glasshouse’ and ‘Thank God Thank God You’re Here’. He has also written and starred in the film ‘You Can’t Stop the Murders’, where he received critical acclaim, as well as the cult hit tv show ‘The 40 Foot Show’.

As a result of his television success, Akmal hosted the popular ‘The Wrong Way Home’ drive radio show on the Nova Network.

He has been nominated for numerous awards including Two Australian Comedy Awards, two Helpmann Awards (for excellence in live performance) and an ARIA award (Australian Recording Industry Award) for his DVD 'Live and Uncensored'.

For further information on Akmal Saleh please contact one of Keynote Entertainment’s consultants on 1300 661 904 or info@keynote.net.au and we will be happy to assist you. 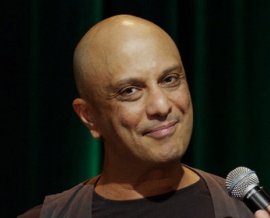