Adam Rozenbachs is a stand-up comedian, broadcaster, writer, voice over artist, actor and broadcaster.  Rozenbachs has performed at the Melbourne International Comedy Festival many times and his shows regularly sell out.  Rozenbachs has supported Adam Hills and Dave Hughes on tour and was a regular on Spicks and Specks.

In his life as a writer, Adam spent eleven years writing for the hugely successful Channel 10 program “Before The Game”.  Rozenbachs wrote for the first five seasons of Spick and Specks as well as Adam Hills in Gordon Street Tonight.  Adam’s skills were also utilised to write for, Comedy Inc., Skithouse, The Big Bite, and The Logies. In print, Adam wrote a regular column for the Herald Sun, and has been a guest contributor to  Men’s Fitness, The Sunday Age and Crikey.com.au

As a comedian, Adam has performed regularly on the stand-up circuit, he appeared as a regular on Spicks & Specks, Mick Molloy’s The Nation, Rove [live], The Comedy Channel’s Stand Up Australia and Dave Hughes’ Handy DVD.

Rozenbachs skills have been utilised by 774ABC where he has been a broadcaster and regular host with Lindy Burns.  Adam also appears regularly on the Hot Breakfast, Triple M’s breakfast show with Mick Molloy, Eddie McGuire and Luke Darcy.  He also appeared regularly on Hughesy and Kate and had a weekly guest spot on Robbins, Stilson and Molloy.

But perhaps Rozenbachs, proudest moment in Australia – a nominee for Cleo Bachelor of the Year – he may not have won but came a tied second with 48 other competitors.

Adam’s comedic wit and timing have been used to deliver hilarious entertainment at corporate events and he has performed at events including; presidents lunches at Melbourne and North Melbourne Football Clubs, Animal Asia Foundation, Optus, The Victorian Labour Party, Nova, Noodle Box and the Great Grand Final Comedy Debate for the Essendon Football Club’s Women’s Network.

Rozenbachs always performs to rave reviews and will leave your guests breathless from laughing. 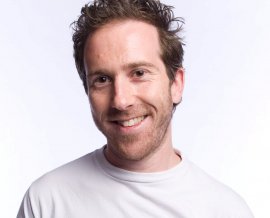