Modern-day warrior chieftain; he displays characteristics we value most as Australians

The son of a soldier, he attended Waverley College in Sydney and later graduated from the Royal Military College, Duntroon, in 1968. He was sent to Malaysia as a lieutenant in the 1st Battalion, Royal Australian Regiment. During his next infantry posting in Vietnam he commanded a rifle platoon and was awarded the Military Cross for his performance and leadership during an assault on enemy positions.

With his wife Lynne, the next twenty years saw the family grow to three sons and a wide variety of defence force postings, including extended duty in the UK and India.

In 1999 Peter Cosgrove became a national figure following his appointment as Commander of the International Force East Timor (INTERFET).  He was responsible for overseeing East Timor’s transition to independence during, what was to become, a tense and uncertain period. The International Force rapidly and decisively restored law and order and handed over to another UN force early in 2000. For his leadership of INTERFET he was subsequently advanced to the rank of Companion in the military division of the Order of Australia, and was invested by Her Majesty the Queen at Yarralumla during her visit to Australia early in 2000.

He was soon promoted and made Chief of the Army.  He went on to be promoted again to General and was appointed Chief of the Defence Force.  Peter Cosgrove retired from the Army in July 2005.

Subsequently, he accepted positions on numerous boards, including QANTAS, Cardno and the Australian Rugby Union.  He was appointed by the Queensland Government to lead the taskforce rebuilding communities in the Innisfail region following the devastation caused by Cyclone Larry in 2006.  From 2007 to 2012, he chaired the Council of the Australian War Memorial, and served as Chancellor of the Australian Catholic University from 2010 until early 2014.

General Sir Peter Cosgrove was Australian of the of the Year in 2001. His best selling autobiography “My Story” was published in 2006 he delivered the Boyer Lectures series, “A Very Australian Conversation” in 2009.

As a speaker, Sir Peter Cosgrove is passionate and enjoys presenting keynotes on the topics of leadership, teamwork and motivation. 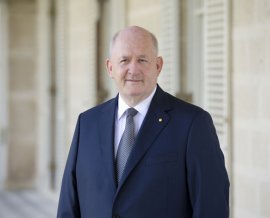