Not many people would be expected to remember October 10th 1987 but Michael Groom recalls it vividly. At 6.15pm that day he became the 1st Aussie to climb Himalayas Kangchenjunga, which is the 3rd highest mountain in the world, and he did this without the use of bottled oxygen or the support of a Sherpa.

This climb also marked the conclusion of Michael’s training plan which would culminate in him climbing Mt Everest. Unfortunately with great accomplishment there is at times a price to pay and Michael would pay deeply for this.

After surviving an extremely unlucky accident that almost left him crippled, in 1993 Michael was finally able to achieve his boyhood dream of climbing Mt Everest. Michael has since succeeded in climbing the 5 highest mountains in the world.

Michael Groom was awarded an Order of Australia Medal on Australia Day 2000 for his accomplishments in mountaineering.

An inspiring speaker, Michael has motivated our armed forces heading off to war zones, inspired athletes struggling to overcome injury, moved everyday audiences keen to get a little closer to the truth of ‘‘no pain no gain’’, or who just really enjoy hearing a great Australia’s speaker tell a story of a dream or ambition being achieved against all odds.

Michael’s book 'Sheer Will' is an inspirational book that once you start to read is truly difficult to put down, and his presentations, accompanied with amazingly beautiful photographs, is to see the earth as he saw it, in its most natural and stunning form – the way it should be.

The film is based on the 1996 Mount Everest disaster, where several climbers died. There were 2 expedition groups, 1 led by Scott Fischer (played by Jake Gyllenhaal) and the other by Rob Hall (played by Jason Clarke), who tried to climb the mountain. 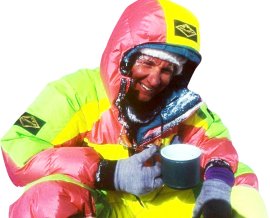