Having more than 40 years of experience in performance and management, Leigh Matthews understands the difficulties that come with leadership and organisation. Described as ‘Lethal Leigh’ during his AFL footballing career, he went on to become one of the greatest AFL coaches in the history of the sport.

Recruited by Hawthorn, Leigh was one of the game’s top players and his skills saw him participate in 332 games including four premierships and win the clubs Best and Fairest award eight times. He also won the VFL’s leading goal kicker and the MVP award, was a three time All-Australian and a Victorian representative fourteen times.

In 1985, Leigh retired from the Hawks and became an Assistant with Collingwood. By the end of 1986, he was promoted to a senior role before he began to coach the Magpies for nine years. In 1990, Matthews led the team to the Premierships, which broke their 32-year long drought and brought success to the football club.

Deciding to move away from the physical side of the sport, Matthews began to become involved in the media side. He shared his knowledge and expertise of the game and became an important part of Seven’s AFL coverage as well as within the print and radio side.

In 1999, Leigh furthered his coaching career and joined the Brisbane Lions, where his skills helped to lead the team to a preliminary final after they were last on the ladder, cementing his incredible coaching abilities. The Brisbane Lions went on to win three consecutive titles under his guidance.

At the end of 2008, Leigh retired from coaching the Lions after being named as the eighth longest serving coach in AFL history. He immediately returned to the media and assisted heavily in Seven’s Finals broadcast. Two years later, in 2010, he was awarded with the Australian Football Media Association’s title of ‘Most Outstanding Commentator for Television Broadcasting’. He is now regularly featured on television on Friday Night Football as well as on the radio for 3AW’s Sport Today program.

Leigh Matthews has an uncanny ability to connect with his audience and can help encourage and inspire every individual in the room. His presentations are motivational and insightful, and with the use of examples he can work to improve leadership abilities and communication in any organisation. 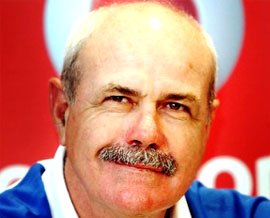