Inspirational story of achievement in the face of failure

In the face of adversity John Cantor demonstrated impressive determination. He is an avid explorer who worked hard for 6 years to reach his goal. He can tailor his presentations to suit any audience or brief.

In 2006, John set a goal to navigate the Brooks Range in Alaska solo. He had never used a map or a compass, never camper in the wilderness or been alone for a long period of time and knew nothing about expedition planning.

The Brooks Range spans the entire width of Alaska within the Arctic Circle and is considered to be one of the most challenging solo expeditions globally.

The planning and research for the expedition was another challenging part of the journey. Information about the Range is difficult to come by, there are no established routes across the range and it is only available by bush planes with limited landing sites.

Between 2008 and 2010, Cantor made three attempts to conquer the Brooks Range, alas none were successful with his first attempt only lasting 4 days. In 2011, he decided to take a different approach after so many failed attempts.

In 2012, John set off with the goal to achieve his six-year dream. He encountered multiple challenges including Achilles tendonitis which caused John extreme pain, causing him to abandon the food he needed to chew. He began to drink 200ml of olive oil, five serves of a weight-gain powder mixed with water, 2 chocolate bars and a Backcountry Cuisine Meal in order to survive within the harsh climate and conditions.

The expedition was expected to take Cantor two months but he was moving much faster than planned, averaging 52km a day before starting the river section of the range.

On the Noatak River he faced challenging winds which caused him to spend time and energy paddling which didn’t result in much movement. On the sixth day battling the river and its ravaging winds, John was less than a day’s paddle to the end and did not expect to finish.

Through pure determination, John completed the Brooks Range expedition. He averaged 93km a day and paddled for over 16 hours a day, but his efforts where record breaking. He managed to travel over 1,600km in 31.5 days which set a new speed record. He now plans on returning to the Brooks Range to attempt to traverse it in winter conditions.

John Cantor’s presentations are engaging and interesting, and through the use of footage and images from his trips his key messages are sure to remain with audiences long after the conclusion. He speaks to companies, sports teams, businesses and schools about the importance of determination, resilience, goal-setting, believing in oneself and overcoming challenges to achieve goals. 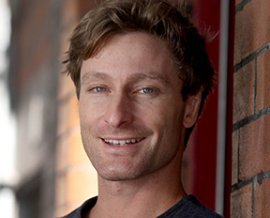