Tom Williams is a former carpenter turned media personality. A professional and uplifting speaking, he fits any event and works to engage with his audience.

His official media career began in 2000, ringing Triple J’s Merrick and Russo to participate in a discussion. His rave led him to become a regular guest on the show with his own segment titled ‘Tom the Chippy’. When the show moved to the Sydney radio station NOVA the next year, Tom moved with them, running his own segment every Friday morning.

His personality and easy-going attitude made him first choice as the carpenter on Seven’s DIY show, ‘Room for Improvement’. Tom was also consulted as a general tradesman on the show.

In 2005, Tom gave a winning performance on Seven’s ‘Dancing with the Stars’ becoming a household name as he did so.

With a rare ability to be both familiar and engaging, Channel Seven gave him the opportunity to work as a reporter on ‘The Great Outdoors’, a role he stayed in for seven years. Tom spent his time travelling across the globe participating in adventurous activities that filled him with adrenaline. From paragliding over Switzerland’s Matterhorn, trekking through a Guatemalan jungle and exploring an active volcano in Costa Rica, as well as many more heart pounding adventures.

After concluding ‘The Great Outdoors’, Tom worked as the host for ‘The Mole’ and ‘Surf Patrol’, and co-host for ‘Gladiators’ on Channel Seven.

In 2008, Tom joined Channel Seven’s commentary team at the Beijing Olympics, calling the actions at the BMX and canoe-kayak events. Later in the year he was a roving reporter at the Bathurst 1000.

Tom published his first book in 2011. Titled ‘DIY Around the Home’, he shows readers how to handle some of the most common projects around the home.

When not working, Tom is seen supporting local and international bands. He is also an ambassador for AFL team Sydney Swans.

​Submit an enquiry or contact us to book Tom Williams for your next event.

Tom was a delight to work with, super professional, great anecdotes and well-practised on all his content. We received fantastic feedback and look forward to working with him on our next event. 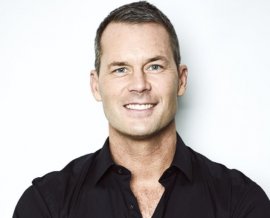