Glen Carlson is an entrepreneur and co-founder of Dent Global. He is a top speaker for fast small business growth and the best business models to maximise profit. Giving his own experiences and strategies businesses can use, Glen helps to improve small businesses across Australia.

Dent Global was rated as Australia’s 9th fastest growing company in 2014 by BRW Fast Starters and Smart Company, an indication of Glen’s impeccable work within the small business community.

Founded in 2010, Dent Global is an international business accelerator for small, entrepreneurial and service based businesses. The company has office across the globe including in the United Kingdom, the United States, Singapore and Australia. Dent has aided over 2000 companies to increase their presence in the business market. They have specified programs including Threshold, Key Person of Influence, Campaign Driven Enterprise and 24 Assets.

Dent has launched three best-selling books on business, received major awards and raised over half a million dollars for charities around the world.

Glen understands the importance of small business and knows how to survive within the business community. His confidence and enthusiasm inspires and motivates every audience member, equipping them with the tools required to follow their business ideas and build a successful company. 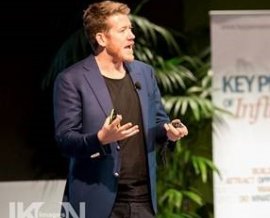