Elizabeth McIntyre  clearly has a passion for her industry!

Elizabeth’s success in diverse and different industries makes her story one of impact, vision, engagement, growth, delivery and people. Elizabeth is frequently asked how she has gone from Disney to Bricks and the lessons she has learned along the way.

Elizabeth’s ability to engage stakeholders at all levels has been key to her success. She helped achieve a revitalization of the Ford brand through V8 Supercars. Following her success in the motor industry she developed the franchise for Walt Disney Television in Australia and New Zealand. Working in such diverse and reputable industries taught Elizabeth never to underestimate the loyalty of a passionate and engaged consumer.

Leaving the world of entertainment, television and sport, Elizabeth stepped into a new and diverse role as the Group CEO for the peak industry body for brick manufacturers – known as ‘Think Brick’. Under Elizabeth’s lead and implementation the ‘Think Brick Awards’ have become the richest and most successful design awards in Australia. She has helped transform Think Brick, garnering premium exposure and ensuring that brick remains in design as a contemporary building material.

Uniting industry and organisations during periods of uncertainty and change is an area in which Elizabeth thrives. Her transparent, energetic and outside the box approach shows organisations how to identify extraordinary possibilities that ensure transformation.

Elizabeth speaks to audiences on the following topics: 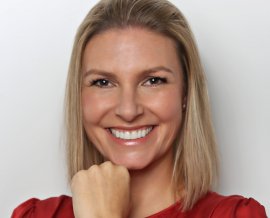