Business Entrepreneur, Founder of the Budget Rent a Car System and Best-Selling Author

Founder of the Budget Rent a Car System in 1965, Bob is proof that you could develop an enterprise in which all employees were committed to excellence.

Bob grew Budget into a $400 million international enterprise employing more than 3000 people from a two-person small business. During his 25 years with Budget, he exported the Budget System to over 20 countries, including Japan and New Zealand.

Due to Bob's ability to inspire his employees and his commitment to customer service, Budget became a trend-setter in employee relations. In addition, it was one of the first companies in Australia to introduce staff health and fitness programs.

With his approach, Bob changed how business was conducted in Australia at that time. For his success, he was dubbed as "the entrepreneur's entrepreneur" by Business magazine BRW.

A true champion of small businesses, Bob has spearheaded campaigns against the Fringe Benefit Tax and Capital Gains Tax, encouraged deregulation and fought hard to change the 'two airline system' in Australia.

Currently, Bob serves as the Director of the BSR Group. He has held high positions in numerous organisations, including as President of the Melbourne Chamber of Commerce, Founder and Inaugural President of the Australian Customer Service Association, Chairman of the Federal Government's Trade Negotiations Advisory Group and President of the North Melbourne Football Club.

In 1979, Bob was awarded the Sir Charles McGrath Award for Marketing.

As a speaker, Bob is highly sought after for his wealth of business and sporting experience. Using an entertaining and informative approach, he provides practical advice, insights,  and new approaches to all facets of human endeavour.

Bob is an experienced speaker, having given over 2000 speeches on customer service, marketing, leadership, management, franchising, and AFL Football. As the former President of the North Melbourne Football Club, Bob knows the importance of a positive "can do" attitude. He is a firm believer that by remaining optimistic and having an expectant attitude, we can overcome enormous adversity and find success.

As a best-selling author, Bob has documented his success and awe-inspiring story in his books, "Bob Ansett, An Autobiography", "The Customer", and "The Meaning of Success". 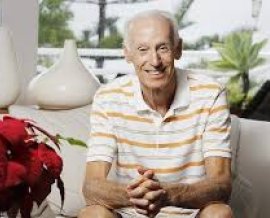