Author of The Real Inspector Rex

Matt’s talks are both entertaining and informative, giving a unique insight into the elite police dog squad. His inspirational and motivational presentations are enriched and his messages entertaining with his use of anecdotes drawn from his many years as a frontline Police Dog handler.

Matt shares his dog squad experiences from his non-fiction books, ‘Blue Paws’(2009) and ‘The Real Inspector Rex’(2013), both of which were published by New Holland Press and have become best sellers. Moving, yet often highly amusing books containing tales about a man and his dog who are inseparable and together fight crime on a daily basic. Tales include vicious criminals that the super dog trails and catches.

Matt worked as a Prison Officer at Sydney’s Long Bay Prison before spending the next 20 years as a front line police officer in the New South Wales Police Force. The last 13 of those years were as an elite police dog handler with his two partners, Police Dog Merlin and Police Dog Rex. Matt was decorated for bravery on a number of occasions before succumbing to injuries received in the line of duty, which forced him out of police work. Matt is currently working on two fiction novels, the first ‘K9 Blue-Ground Zero.’ which will be published by Harper Collins in April 2014. The second, ‘K9 Blue-Duck and Weave.’ In late 2014.

Matt has spoken about his experiences for many different groups and companies including the Royal Caribbean Cruise Line both here in Australia and the United States. Matt was the keynote speaker at the Spring Rose Charity function held in Adelaide in 2013. Matt has conducted numerous radio interviews with the likes of Alan Jones and John Laws, Matt has also appeared on the Channel Nine Mornings Show. 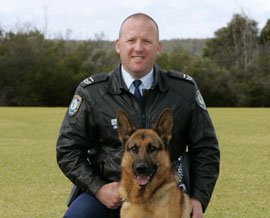