Disruption can be the best opportunity if you embrace it

Jerry Grayson’s story of an extraordinary career in helicopters, disrupted entirely by the advent of drones, will resonate with any audience. He's an unforgettable speaker on topics such as drones and digital disruption, risk management, teamwork, resilience and leadership and is certain to leave audiences inspired and motivated.

From Saddam Hussein's invasion of Kuwait to the infamous Fastnet Yacht Race, on stage with The Rolling Stones, on location filming Black Hawk Down, filming the immediate aftermath of Hurricane Katrina and broadcasting the Soccer World Cup from South Africa, Jerry Grayson, has a personal story to tell about each one.

He was just 17 years old when he joined the Fleet Air Arm, the youngest helicopter pilot to ever serve in the Royal Navy. By the age of 25 he was the most decorated peacetime naval pilot in history and was awarded the Air Force Cross (AFC) by the Queen for outstanding gallantry in search and rescue.

The work of a search and rescue pilot is vital, dangerous, thrilling and on the edge. Jerry saved fighter pilots who had ditched at sea, rescued desperate sailors from sinking yachts during the infamous Fastnet Race - in which only 85 out of 303 yachts made it back to harbour - and picked up a grievously ill crewman from the deck of a nuclear-armed submarine that was playing a cat-and-mouse game with the Soviet navy.

In 2500 hours of flying with the Royal Navy, Jerry and his crewmates saved more than 70 lives on 120 rescue missions. His story is not an account of one man's deeds, but a salute to all the men and women he worked with who were able to turn tragedies into triumphs.

Since leaving the Navy, Jerry has carved out a career becoming one of the world’s leading helicopter film pilots, and the world’s leading aerial film director. He set up a production company specialising in footage shot from helicopters and went on to contribute to the likes of Planet Earth, An Inconvenient Truth, the James Bond film A View to A Kill, Black Hawk Down.He wrote, directed and flew his helicopter on the IMAX film The Earth Wins filming above New Orleans 48 hours after Hurricane Katrina struck, over the aftermath of Black Saturday in Australia’s state of Victoria, as well as above Europe, the UK, Africa, the Middle and Far East.

In the world of sport, Jerry’s first world broadcast came from the Sarajevo Winter Olympics in 1984. He went on to command the entire airspace over Melbourne for the Commonwealth Games and over Doha for the Asian Games, in addition to his flying and aerial directing roles using ten helicopters at the Athens Olympics and seven at the South Africa Soccer World Cup.

Jerry also flew the Melbourne, UK, Brazil and South Korea F1 Motor Racing Grand Prix, and supplied the aerial filming unit for the worldwide broadcast at all motor races, from 2010-2013.  He filmed Mark Webber’s last-ever race in F1, which he describes as heart-stopping.

Just a few months into 2015, Jerry’s three decades of flying experiences almost entirely vanished into thin air. The DRONES had arrived and taken over. Jerry had to deal with the most extreme form of disruption; when the career he’d so successfully built simply ceased to exist. To enable him and his team to move forward positively, Jerry had to recognize the disruption, address it and learn a whole new way of doing his job.

Jerry is an internationally recognised expert in the world of flight, both manned and unmanned flight; chairing and presenting keynotes at events such as The International Drone Expo in the USA, at the Drone Zone at the Australian International Airshow, and London’s Commercial UAV Conference which is the largest in Europe.  His corporate clients have included Optus, Metrotrains, Swiss Re, Sword Active Risk.

He has worked with The Royal Australian Navy, the Defence Science & Technology Group, the Department of Fire & Emergency Services in WA, The Australasian Sonographers Association, the Bendigo Kangan Institute, Melbourne Grammar, Geelong College, Wyvern House at Newington College, as well as many other organisations and businesses.

Digital Disruption and Drones
Within a few months during early 2015 Jerrys three decades of work and experience in flying on major cinema and television productions almost entirely vanished into thin air. The DRONES had arrived and taken over. Jerry tells of the most extreme of disruption, when the career he had built simply ceased to exist. He talks about what he had to do to recognise it, to address it and the changes he had to make to enable him and his team to move forward positively.
Diversity and Dealing with Cultural Change
In his career managing aerial broadcast teams, including working on the Olympics and similar global events, Jerry encountered new challenges when dealing with people from diverse cultures and social backgrounds.
Teamwork
Everyone works in a team. Success in any field will always depend on how well you operate with those who surround you. As a search and rescue pilot with the Royal Navy, Jerry knows this fact better than anyone. In this presentation he speaks about the key elements to a successful team and extraordinary things that those teams can achieve. He compares and contrasts the differences between his small and highly practiced military ;team versus his larger crews who needed to hit the ground running on major television events in civilian teams of up to 100 people, many of whom had never even met each other before day one.

We were lucky enough to have Jerry Grayson as our guest speaker at our 2020 conference. Our brief to Jerry was to cover team engagement, empowerment and trust and also overcoming disruption and to say the least, he nailed it. Jerry is extremely engaging to the audience and continually wowed them with his real life experiences. Our post conference survey resulted in Jerry’s presentation being instrumental to a very successful day. I can recommend if you are looking for your next inspirational guest speaker.

Jerry has the rare capacity to present the most serious issues we face as a global community in an engaging, articulate and humorous way. He is warm, witty, considered and poignant. He thankfully steers well clear of the evangelical approach but is extraordinarily adept in allowing the message to speak for itself. I highly recommend Jerry Grayson; he is a highly intelligent and entertaining speaker who would add enormous value in both educational and corporate settings.

Jerry Grayson presented as our keynote speaker. Jerry captivated the audience with the stories of his career and his rescue missions and he was also able to connect the audiences interest in "risk" with his critical decisions, leadership and team work as a rescue pilot. Jerry's openness to questions and willingness to mingle with the delegates was also very popular. I have no hesitation in recommending Jerry as an engaging speaker for any event!

We recently engaged Jerry to present at our annual conference on the topic of “Embracing Change”. Jerry is a charismatic and engaging presenter who has the ability to relate his life experiences in telling a captivating story that still delivers a strong and powerful message. Feedback from the audience of around 200 members was extremely positive and I would warmly recommend Jerry to any organisation or event that wants to challenge and motivate their audience.

Many of us can tell a story, particularly if we were there at the time. Not so many of us can tell the tales of the type of experiences that Jerry has had in his career. And only a few, like Jerry, can both draw insights from those experiences and relate them to any particular audience. What sets Jerry apart from the numerous story tellers out there on the keynote speaking circuit is the fact that he works with his ‘client' beforehand to understand the audience and the message that the client is trying to convey. From there he draws on his vast experience, tailors his message impeccably. When Jerry spoke to a group of emerging young leaders from Swimming Victoria clubs recently he was given the ‘graveyard session' - the last session of a long day. Yet he enthralled and challenged his audience for the whole hour... No matter your audience I cannot recommend Jerry highly enough. You will be awe struck, inspired and uplifted.

Jerry combines an intimate knowledge of his subject with a natural storyteller's ability to hold an audience. He has an easy style and injects just the right amount of humour at just the right time. He manages to speak with both assurance and warmth and has an excellent sense of timing, leaving the audience wanting more.

Jerry was fantastic, he was the best first day speaker we have had over the last eight years. His presentation was highly interesting, motivational and captured the audiences’ attention from the beginning. He is a down-to-earth person with an amazing story to tell. 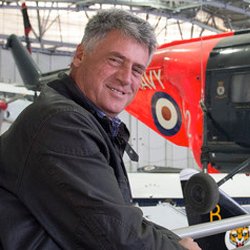