A multifaceted media performer and a respected AFL expert analyst

During a high profile career within AFL, Scott Cummings has played for some of the most prolific teams in the competition including Essendon (1994-1996), Port Adelaide (1997-1998), West Coast Eagles (1999-2001) and Collingwood (2002).
During his 8 year career in the AFL, Scott accumulated a number of awards and nominations, the first of which came during his first season with Essendon when he was nominated for the 1994 AFL Rising Star award after kicking 8 goals in his debut game. In 1999, whilst playing for his third club, the West Coast Eagles, Scott kicked 95 goals during the season, which was his career best tally and resulted in him being awarded the 1999 Coleman Medal for leading goal kicker. Following a short career at Collingwood, Scott retired from the game following a struggle with injuries.
Scott has since forged a name for himself as a multifaceted media performer and a respected AFL expert analyst within the media, co-hosting on SEN 1116's Ralphy, Serge and the Big (2004-2005), working as a boundary rider for Fox Footy Channel in 2006, as well as working with 3AW until 2010. In 2011 Scott co hosted the Cheap Seats on Melbourne's 91.5FM with Peter Helliar. Scott co hosted Sports day WA, a daily drive-time sports radio show which goes into regional WA from 2011-2016. In 2017 Scott co-hosted Footy WA, a show specifically built for the WA markets which runs for 27 weeks through the finals on Channel 9 across both Perth and regional WA and has since continued this role into the following AFL seasons.
Scott has previously written a column for MX Newspaper and was the face of Jenny Craig’s Jen4Men campaign. 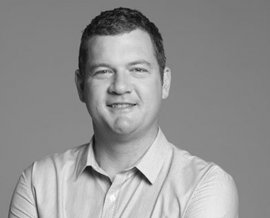