Sam’s tennis career highlights include being an Australian Davis Cup player, winning the 2015 Newcombe Medal (which is awarded to Australia’s most outstanding tennis player for the year), holding the world record for the fastest serve recorded in a tournament, reaching a career high singles ranking of 53 and unbelievable experiences such as playing Roger Federer on centre court at Wimbledon and Rafael Nadal on centre court at the French Open.

Sam retired after the 2018 Australian Open and has embarked on a promising media career which has already included commentary, appearances on Nova radio, The Today Show and The Project. In August 2018 Sam was announced as part of Channel Nine’s new Australian Open commentary team. 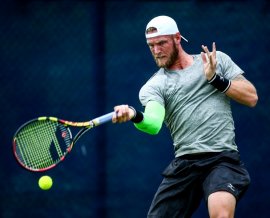