With three Paralympic Games already under his belt, Ryley Batt is one of the best and most experienced players in the Australian wheelchair rugby team. Although Ryley was born with limb deficiency which left him with no legs and only a few fingers on each hand, he has never let this stop him in life.

As a child, Ryley thought wheelchairs were for disabled people. He scooted around with his friends on a skateboard until age 11 when a wheelchair rugby demonstration at school finally convinced him to use a wheelchair. He hasn't looked back since. By 12, he was in the NSW Wheelchair Rugby Team, and by 13, in the Australian National Team. At the Paralympic Games in Athens in 2004, Ryley became the youngest ever wheelchair rugby Paralympian at just 15.

Athens was a major turning point for Ryley, where his provisional classification of 2.5 was overturned and he was classified at the Games as a "high pointer" - 3.5. This required Ryley to adapt to new responsibilities on the court and to lift his game to a new level. Ryley managed to step up his game and was awarded the most valuable player in 2004, 2006, 2007, 2008, 2009, 2010 and 2011.

In 2008, Australia took the silver medal in Beijing and ever since then Ryley had the itch to win gold.

During his sporting career to date, Ryley has already achieved more than most.

Ryley has played two successful seasons in 2009 and 2010 for San Diego winning both titles in the U.S nationals. He also won MVP for both these seasons.

Ryley helped Australia take out the 2010 Four Nations and Canada Cup, while taking silver at The World Championships. He also took out the MVP for all 3 of these tournaments.

In 2011, Australia won both the GB Cup in Cardiff, Wales and the Asia-Oceania Championships in Seoul, Korea, with Ryley taking home MVP for both tournaments.

In 2012, Ryley helped Australia take home the gold medal in the London Paralympic games by scoring 160 goals during the tournament, including 37 in the gold medal match. This has been the biggest achievement in Ryley's sporting career so far. Ryley is now motivated to train even harder to try to get another gold medal at the Rio 2016 Paralympics. In the same year, Ryley was Wheelchair Sports NSW Athlete of the Year and a finalist in the NSW Young Australian of the Year.

Off the court, Ryley has begun to forge a career as an in-demand public and motivational speaker, inspiring such diverse audiences as attendees at leadership, business and economic conferences and youth summits. 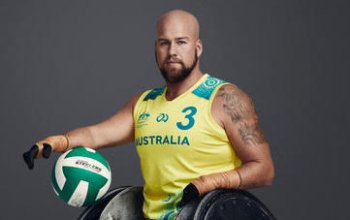