A combative and wholehearted cricketer, Michael Slater (affectionately known as “Slats”) played many vital innings for New South Wales and as an Australian opener with his adventurous brand of stroke play.

A product of Wagga Wagga, his was a meteoric rise. Following a stint at the Australian Cricket Academy, he made rapid strides, turning a place in the New South Wales Second XI at the start of the 1992-93 season into a berth in Australia's 1993 Ashes squad by the end of that summer. After notching a half-century in the opening match of that series - alongside fellow New South Welshman, Mark Taylor - and complementing it with a brilliant century in the following encounter at Lord's, he soon became a regular in his nation's Test team.

Aside from the period between October 1996 and March 1998, Michael occupied a position at the top of the Australian Test batting line-up for close to a decade.

Amid a golden run of success for the team as a whole, individual highlights have included his 219 against Sri Lanka in Perth in 1995-96; and his brilliant home series against New Zealand in 1993-94 (which netted him 305 runs at 76.25) and England (623 runs at 62.30) in 1994-95. His signature trait of kissing his helmet whenever he reached three figures was seen 14 times, and he made scores in the nineties on a record-breaking nine occasions. He was also one of only four players to have played in each of the 16 matches between late 1999 and early 2001 which delivered the then Australian team the greatest run of consecutive victories in the history of Test cricket.

Michael played his last Test against England in August 2001. He returned to State cricket and was a key member of the NSW team which won the Pura Cup and ING Cup Double in 2002-03. Slats was the leading First Class run scorer for NSW that season with 770 runs at 42.78 including 204 against Western Australia in Perth and 100 in the Pura Cup final against Queensland in Brisbane.

In June 2004, Michael brought down the curtain on his dazzling career. Michael had been battling illness for some time and after consultation with his doctors he decided to announce his retirement.

2005 saw Michael put down the bat and pick up a microphone and began what is shaping up to be an extremely promising career as a sports commentator. He was part of the Channel 4 commentary team to bring the world the historic 2005 Ashes Series in England, now widely thought of as one of the greatest cricketing test series in history. 2005 also saw Michael lend his commentary skills to SkyNZ and ABC Radio during the Australian summer cricket season.

In 2006 Michael joined Nine's prestigious Wide World Of Sports cricket commentary team where he has cemented himself as one of the best cricket commentators in the world – as is evidenced by his continued work around the world for broadcasters such as ESPN, BskyB, Sony etc. Michael also appeared as a reporter on Channel Nine's Logie-Award Winning health and lifestyle program, in addition to some radio work on Triple M.

In 2008, Michael signed up with Sky Sports Radio as a co-presenter on the hugely popular The Big Sports Breakfast where he talks all things sport between 5.30am and 9am Monday to Friday.

Further cementing his popularity in 2012 Michael signed on to co-host the NRL Footy Show alongside Paul Vautin. 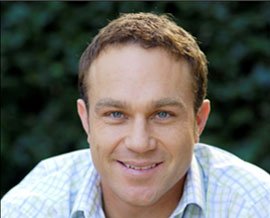