Jason Akermanis is among the AFL's most electrifying players and one of the biggest celebrities, renowned not just for his football brilliance but his honest, open and outspoken approach to the game. He is a Brownlow Medallist and triple premiership player. Jason represented his country with distinction in the International Rules arena, winning the Jim Stynes Medal as Australia's best player in the 1999 series against Ireland in Australia before touring Ireland in 2000.

Jason is blessed with blistering pace and immaculate skills, and the ability to do something special in special circumstances. He is the one of the most sought-after players by AFL press, radio and television reporters because of his refreshingly frank, honest and ever-thoughtful approach to football and the media. He enjoys a high media profile via a string of regular state and national media appearances.

Away from sports, Jason is a highly-regarded public speaker. Incredibly entertaining, forthright, and able to bring a room of thousands together, he is motivational, intelligent, and comes with a lifetime of stories to share. Short of hiring a comedian, no one will make your event as lively and memorable as this decorated Australian football player.

Akermanis’ AFL career is littered with awards. He won the AFL’s ultimate individual honour, the Brownlow Medal, in 2001.  He was a triple Premiership player with the Brisbane Lions and was made All-Australian a whopping four times. Nearly as famous for his post-match handstands as for his athletic abilities, Akermanis was also been voted as club Best and Fairest twice.

Jason is also well known for his quick tongue and brilliant mind. He regularly writes articles on football for publications such as the Herald Sun and the Courier Mail. He has hosted his own radio show, titled The Aker and Macca Show, on radio Triple M and appeared regularly on radio shows for SEN, Nova, and Melbourne Talk Radio. He has also appeared on television, providing football commentary for Channel Nine’s Today Show, the AFL Footy Show, Before the Game, and AFL Game Day. 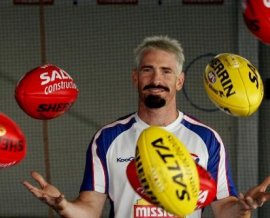