Ian Botham is a retired English Test cricketer, who was one of the most entertaining all-rounders of his generation. His flamboyant batting and successful bowling had the capacity to win games and excite the spectators. His greatest moment came in the 1981 Ashes test at Headingley – where Ian Botham led England to the most spectacular and unpredictable recovery against Australia.  He was awarded BBC Sports Personality of the year in 1981.

Ian Terence Botham OBE, was born Heswall, Cheshire. He later moved to Somerset where he began playing cricket – played for Somerset under 15s. As a youngster he was also a talented footballer – for a short time he played for but settled cricket as his chosen sport.

He gained his Test debut for England in 1977. He went on to an illustrious international career. He took 383 wickets at an average of 28.4 and scored 5,200 runs at an average of 33.54. The figures on their own are not spectacular, but Botham frequently made a big impact in important games. He could also score at a quick rate and some of his innings were memorable, even if didn’t score a century. He had tremendous power and could hit the ball out of the ground, though he also had a good technique. His swing bowling was effective for his ability to move the ball – even when his pace slowed down in later years, he could make a big difference.

As well as his cricketing career, he was a prolific charity fund raiser. His motivation for undertaking charity walks occurred when he went to a hospital in Somerset to receive treatment for a broken toe. By mistake, he took a wrong turn into a terminally ill children’s ward and was moved by the fact many children had only a few weeks to live.

To raise funds he undertook gruelling walks. Several times he walked from Lands End to John O’Groats. These walks received high publicity and raised substantial funds. Since retiring from cricket Ian has worked as a commentator for Sky Sports, becoming a regular voice on TV.

Ian has a wealth of entertaining stories of his time as an athlete, what it means to be a leader and heart warming tales of the rewards and fulfillment that have come from his fund raising endeavors 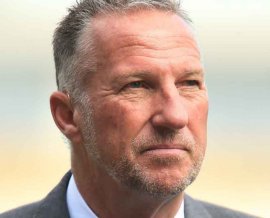