Dylan Alcott OAM is one of the world’s most talented athletes. In 2021, he became the first man to complete the Golden Slam; Dylan won Wimbledon and the French, US and Australian Opens, alongside Gold at The Tokyo 2021 Paralympics.

He currently ranked No. 3 in the world for Wheelchair Tennis and won a gold medal at the 2008 Beijing Paralympics for basketball, making him the youngest Wheelchair Basketball gold medallist. Dylan received an order of Australia medal in 2009 at age 18 and is currently an ambassador for Variety and The Starlight Foundation. He also holds a Bachelor of Commerce from The University of Melbourne.

Dylan and The Rollers followed up their win in Beijing with victory at the 2010 FIBA World Championships, becoming the first Australian basketball team to ever win the title. Alcott was selected in the World All Star 5, proving he was the strongest player in his position in the world. In 2012, he returned from the London Paralympic Games with a silver medal.

In 2013, Dylan resumed his tennis career, and was granted a wild card into the 2014 Australian open, reaching the semi-final. After only 18 months into his comeback, Dylan won his first ever grand slam title, The Australian Open, and is currently ranked number three in the world. In late 2014, Dylan broke the world record playing wheelchair tennis for 24 consecutive hours non-stop, setting the new world record and raising an incredible $100,000 for two charities – The Starlight Foundation and Variety.

Dylan is a passionate motivational speaker – his inspirational storytelling instils an extremely moving sentiment in his audiences. Dylan is always seeking to correct the perceptions of the disabled community; he brings disability awareness to schools and is a regular guest on many radio and television stations across Australia. He is also a national athlete spokesperson for the Australian Paralympic committee and is world renown for his wheelchair crowd surfing at music festivals. 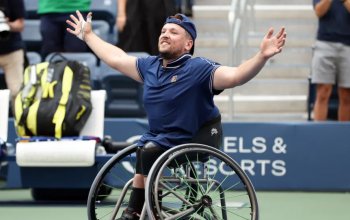