As a child who grew up being bullied severely in a country town with one of Australia’s highest suicide rates per capita, to completing contract work around Australia at only 13 years of age and becoming a head university teacher at the age of 21, Todd Jarratt has fought and overcome the odds his whole life. Todd’s story is one of persistence and his message empowers others to recognise that their skillset is truly only limited by their mindset.

At a mere 23 years of age, Todd is one of the most passionate and hard-working people you will ever come across.

At the age of 13, while injured and unable to compete in his sport of motocross, he commenced sports commentary around Australia. From ages 13 to 16, Todd juggled living at boarding school five days per week, with being on the road with his parents racing motocross or commentating nation-wide on weekends.

By 18, he was working as a personal trainer, managing a national motorsport team, and creating the time to maintain an ‘A’ average mark studying sport science full time at university. One year on, and he had become a regular journalist for numerous national and international motorsport magazines and websites.

By only 21, he had written his first training article for Men’s Health and Fitness magazine, launched his own training and elite athlete consulting business, and also commenced his role as a head university tutor in the fields of sports science and exercise physiology.

Growing up, Todd knew very few people and even fewer people knew him. He has earned each of his positions at such a young age, not by knowing the right people, but by working so hard for so long that people could do anything but ignore him.

Todd’s message empowers others to rise above the limiting standards ingrained within society. He highlights and explains through experience, that reality is in fact only a perception, and that as humans, we have subconscious limits within our minds, that once surpassed, enable our true potential.

His first-hand experience in proving this to many of his elite athletes and then seeing alterations not only in their results, but also their learning, finance and relationships, is truly incredible.

Todd breaks down social standards and limits, and in doing so transforms the mindsets of all his listeners. His passion alone has inspired growth in others for years, however it’s the way he combines his life’s purpose, with his personal experience and professional knowledge, that enables him to surpass inspiration and now catalyse huge life change for others. 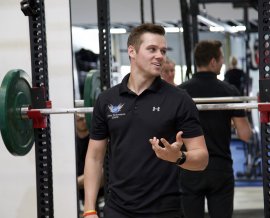