Thomas King is a social entrepreneur, international speaker and future food specialist who has been recognised as one of Australia’s most accomplished young pioneers. For the last decade, Thomas has driven food systems, environmental and poverty alleviation initiatives across five continents. He was named Young Australian of the Year VIC in 2015 and awarded a Myer Innovation Fellowship in 2019.

Thomas' career began at age 13, when he developed the world’s most viewed website on unsustainable palm oil production, which offered information and tools for consumers and food manufacturers. In the years following, he helped lead social, environmental and animal welfare projects across five continents.

Thomas has worked with indigenous communities in the Bornean jungle to strengthen conservation initiatives, represented Australia's youth in a film in the Arctic for IMAX and the COP21 climate summit, was a director for a campaign that raised $1.6 million to alleviate extreme poverty in Cambodia, created an award-winning short film on social change, and he volunteered as a journalist at the London Olympic Games to tell the stories of athletes from disadvantaged communities and report their progress back to their families.

After years driving international campaigns and initiatives, Thomas founded Food Frontier in mid-2017 after realising the impacts of our current food system on people, animals and the planet, and its limited ability to feed our growing global population. Through research, consulting and events, this independent not-for-profit advise and connect businesses, innovators and policymakers to navigate and participate in the emergence of the plant-based and cultivated meats sector. By supporting the growth of nutritious protein alternatives that require fewer resources than industrially farmed and fished meat, Food Frontier aims to create a more diversified and sustainable protein supply. 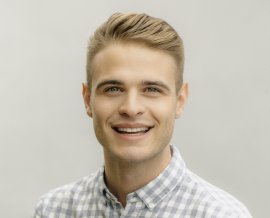