A living legend and man of character

As a strong believer in sticking to true values, Ron Barassi is a no nonsense football coach whose passion motivates and inspires individuals. He is admired for his honesty and straight forward vision to make things happen.

By the age of 41, Ron had played in or coached 17 Grand Finals for 10 Premierships, cementing his reputation for elite performance.  As a coach he took clubs that were at the bottom of the ladder and transformed them into top performers, leading them to success.

Barassi is known for being ahead of his times, replacing his pre-game meal with protein shakes, wearing white boots and supporting national competition and international initiatives. His determination for greatness saw him swapping the coach’s bench behind the boundary line for the coach’s box in the stands. He also sought knowledge from coaches from different sports, aiming to increase his coaching knowledge.

Ron is known for loving challenges and has pushed himself to the limit. He has participated in trekking Kokoda, cycled across Outer Mongolia, has crewed under skipper John Bertrand at Hamilton Island Yacht Race week, skydived, abseiled down the side of a Melbourne office building and has walked on water at the 2006 Opening Ceremony for the Melbourne Olympics.

For over 50 years, Ron Barassi has been the focus for both media and the community as a source of inspiration. His motivational attitude toward challenge has seen him become a highly sought after speaker across the nation. 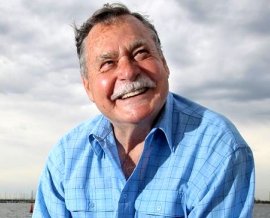