A qualified Flight Paramedic and Mobile Intensive Care Ambulance member, Peter Davidson is a courageous individual who is sure to motivate every audience. His story of dedication to his career is shown throughout his presentations, as well as his extensive leadership skills.

On December 26th 1998, 114 yachts left Sydney Harbour in the annual Sydney to Hobart Yacht Race. Only 44 yachts finished. Of the remnants, 12 yachts were abandoned and 5 sank, leaving 50 yachtsmen needing to be winched to safety and sadly, the untimely death of 6. The event is recognised as one of the worst nautical disasters in Australian history.

Peter was a paramedic aboard the first rescue helicopter that reached the yacht ‘Standaside’, on which eight men needed to be rescued. With weather described as hurricanic, waves were over 25 metres high and winds gusted at over 120 kilometres per hour, he was forced to conduct the most testing rescue in his career. During the rescue, Peter nearly lost his own life twice.

The crew aboard this helicopter are regarded highly and have been recognised nationally and internationally for their dedication, bravery and skill, risking their own lives for others.

For over 16 years, Davidson has been employed by Rural Ambulance Victoria and for over 12 of those years has been spend aboard Helimed One, the Victorian Air Ambulance Rescue Helicopter.

Peter Davidson can coordinate presentations that captivate and engage audiences. He speaks passionately about succeeding in a high-risk environment, the importance of goal setting, teamwork and its benefits, planning and sudden planning, combatting the detrimental effects of self-doubt, battling the odds and crisis management. 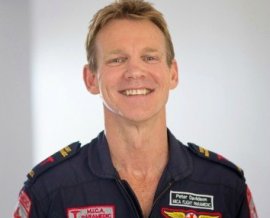