A pioneer in Australian sport and politics

Through her passionate, committed, truth-telling, tireless and ongoing pursuit of the wellbeing and inherited rights for Aboriginal and Torres Strait Islander people, Nova Peris OAM OLY MAICD exemplifies the very qualities and achievements that have, from its establishment in 2007, defined those within the exclusive and prestigious international organisation, The Elders. Nova’s work has seen her involved at community, State and Territory, national and, indeed, international levels.

Throughout her life Nova has endeavoured to be a peace maker, a peace builder and a pioneering woman: she has achieved all of her ambitions in these areas.

While Nova’s achievements as an international athlete brought attention to the potential of Aboriginal women, undoubtedly it was her explosive time in Federal Parliament which showcased her desire to improve the lives of Aboriginal and Torres Strait Islander people. She has been, and continues to be, a trailblazer for Aboriginal people, as well as an inspiration to mothers and women of all denominations and backgrounds. She is a legendary Australian and would be an ideal member representing the Oceania region alongside such exalted and respected company as those currently forming The Elders organisation.

Nova is a descendant of the Gija people of East Kimberley and the Yawuru people of West Kimberley; the Muran Clan Iwatja people of West Arnhem Land. Aged three, she survived the devastation of Cyclone Tracy, the first of many storms she has encountered and endured in her sporting and political career.

As a young mother, Nova pursued her dream, despite the odds not being in her favour, to compete at two Olympics, four World Championships, three Champions Trophy’s and the Commonwealth Games.

Nova's twin achievements of being the first Aboriginal Olympic champion and competing in two different sports at Olympic level, marks her as one of Oceania’s finest athletes.

In 2018, long after retiring as an athlete, she is still ranked in the Australian top 10 for the 100m, 200m and 400m. For her achievements as an athlete and in championing the cause of Aboriginal people, Nova was awarded the honour of Young Australian of the Year in 1997 and has also received the Medal of the Order of Australia (OAM). In 2000, she received the Australian Sports Medal. She is acknowledged in the Aboriginal and Torres 3 Strait Island Hall of Fame, and has written two autobiographies: Nova—My Story and Nova: Finding My Voice. She will publish a third book in 2020.

Nova’s involvement in sport on an international stage alone was significant. But it was her leadership in Federal Parliament, from 2013-16, where she demonstrated her determination to improve the lives of her people. On 7 September 2013, Nova Peris became the first Aboriginal woman elected to the Australian Federal Parliament. Sworn in on 12 November; her maiden speech highlighted the ongoing struggles facing Aboriginal and Torres Strait Islander people, as well as her own unique life journey. In the first of many speeches Nova gave during her time in the Senate, hers was a strong, determined voice of an emerging leader who envisioned great things for her people. She was prepared to act as their voice, and she did this through various speeches on Aboriginal affairs, never shirking an issue; instead meeting it head on, with an honesty and connectivity that is sometimes absent from political leaders.

Moreover, Nova’s ability, and willingness, to mix with and listen to people of all ages and walks of life—always eager to ‘get her hands dirty’—has endeared her to many, while also, importantly, provided her with a unique perspective of the struggles faced by communities and individuals.

During Nova’s three years in Federal Parliament, she travelled the length of Australia in her tireless endeavours to champion the causes and struggles facing Aboriginal people throughout the country. Pride in her Aboriginal identity is a vital ingredient in her fight for the rights of all people, Aboriginal and non-Aboriginal alike. She inspires young people to take pride in who they are, but she also works hard at changing attitudes throughout the Australian community in relation to inclusion and respect for all. Nova has fought for Aboriginal people to have a better life and to heal Australian society in many ways.

In 2012, she established the Nova Peris Girls’ Academy, to provide opportunities for education and training for young Aboriginal and Islander girls.

She resigned from the Senate in 2016 after serving out her first term, so as to spend more time with her young family, but has continued to work with communities, groups and organisations to further improve and enrich the lives of so many people. Nova Peris has demonstrated leadership all throughout her life, breaking down barriers once viewed as unachievable for an Aboriginal woman—or any woman. Her commitment, passion and work ethic is unrivalled in Australia. She is a truly great leader for Aboriginal people, particularly children, and remains committed to bridging the gap between people of all races and backgrounds. Her achievements as a mother, athlete, woman, Aboriginal, and parliamentarian are significant—they are worthy of being ranked alongside many great Australians, and indeed Oceanic people more broadly, of any background, gender or race. Her values, beliefs, work ethic, honesty and commitment are evident in her children and grandson. She inspires them on a daily basis, and is determined to ensure they lead exemplary lives, showing compassion, mental fortitude, honesty, and respect to people of all backgrounds; and that they strive for greatness in their own unique ways. 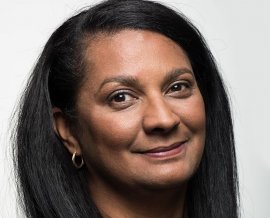