Returned home from the 2012 Paralympics in London as Australia's greatest ever Olympian. Listening to Matt speak is a truly motivational experience!

Matt Cowdrey returned home from the 2012 Paralympics in London as Australia's greatest ever Olympian.

Matt won a medal in every event in London - five gold, two silver and one bronze - to add to his eight medals from Beijing 2008. This included breaking his own world record in the 50m freestyle.

Born with a congenital amputation to his lower left arm, Matt Cowdrey has shown immense strength and courage to succeed and reach incredible heights in the world of swimming.

Matt started swimming at the age of five and was determined to be not just as good, but better than most able-bodied persons. Having set his goals for success, Cowdrey quickly stamped his mark on his S9 classification, breaking his first Australian open record at age 11 and world record at age 13.

In 2004, he competed at the Paralympics in Athens where he won three gold, two silver and two bronze medals and finished the meet with two world and Paralympic record times.

In 2006, Matt Cowdrey continued to improve on his personal best times and became the only Australian male swimmer, including able bodied swimmers, to win individual gold at the Melbourne 2006 Commonwealth Games, where he took victory in the men's 50m and 100m EAD Freestyle events, both in world record time.

Matt added another Commonwealth Gold medal to his haul above after a dominant display at the 2010 Commonwealth Games in Delhi, in which he smashed the world record he set at the 2008 Beijing Olympics in the S9 50m Freestyle final.

At the 2012 Paralympic Trials in Adelaide, Matt Cowdrey set his sights on London 2012 by once again showing his dominance on the multi class events, breaking a world record in the 50m Freestyle and making the podium in five events. He left for London with eight Paralympic, two Commonwealth, and 12 World Championship gold medals under his belt.

His amazing achievements were recognised when he was named the Australian Swimmer of the Year with a Disability two years in a row and the 2005 Male Athlete of the Year at the Stan Wickham Disability Awards.

Matt currently trains in his home town of Adelaide, and in his spare time this intelligent and extremely motivated young man is currently undertaking an internship with the Department of Foreign Affairs and Trade. Matt is a confident and articulate speaker, lending his time to charities and motivating workplaces and kids with his can-do attitude. 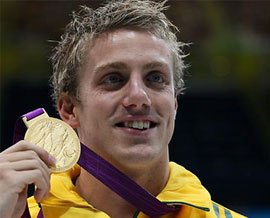