Malala Yousafzai was enrolled in her father’s school at the age of 4. Truly her father’s daughter, while other children fantasized about playing with toys, Malala fantasized about giving lectures. Her brother jokingly shares that Malala is “addicted to books.” But it was in the hallways of her father’s school that Malala found her voice and her vision. Her father, Ziauddin Yousafzai, is a Pakistani educator, activist, and humanitarian who established a thriving school in their rural home in Swat Valley, which aimed to provide educational opportunities for all children. Ziauddin’s dedication to education and peaceful resistance against the Taliban made the world take notice.

Inspired by her father’s activism, Malala began her campaign for girls’ education at age 11 with her anonymous blog for the BBC, Diary of a Pakistani Schoolgirl, about life under the Taliban. Malala soon began advocating publicly for girls’ education. She would join her father on his visits to neighbouring villages to recruit for the school. While he spoke to the men, she would speak to the women. Their crusade was the subject of a New York Times short documentary in 2009. Independently, Malala began attracting international media attention and awards. Due to her increased prominence, at age 15 she was attacked by the Taliban for speaking out. Malala recovered in the United Kingdom and has continued her fight for girls ever since. In 2013, she founded Malala Fund with her father. A year later, Malala received the Nobel Peace Prize in recognition of her efforts to see every girl complete 12 years of free, safe, quality education. Malala is currently completing her undergraduate degree at Oxford University, with a focus on Philosophy, Politics, and Economics.

Malala is the author of three books, ‘I Am Malala: The Girl Who Stood Up for Education and Was Shot by the Taliban’, ‘Malala’s Magic Pencil’, and ‘We Are Displaced: My Journey and Stories from Refugee Girls Around the World’.

For Malala, creating a more equitable world that recognizes every girl’s right to 12 years of free, safe, quality education is not impossible. In fact, it is within our reach. Malala aims to see it happen within her lifetime. 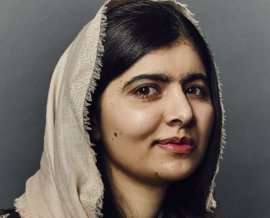