Kylie Jaye, or “KJ” as she prefers to be called, is well known for her extensive experience in the entertainment industry, in Australia and the US where her skills were not only utilised as an on air presenter for E! Network but as a producer as well. KJ is renowned for her expertise and knowledge of issues and trends in health, lifestyle, travel and food.  KJ’s media experience is extensive and she is a lauded corporate speaker on the international circuit.

KJ pioneered lifestyle programming with the creation of Yoga TV, a sponsor-funded fitness channel, which led to the creation and production of more than thirty-five television series, which are seen across forty-five countries over four continents. The boom in Lifestyle television enabled KJ to shine and cement her status as a forerunner of the industry.

Learning to overcome difficulties from a young age has enabled KJ to become a highly successful business woman.  KJ grew up in country Australia.  Kylie has a unique perspective of life developed by growing up in a family where her grandmother, mother and two brothers were blind. Challenging adversity and succeeding, opened up KJ’s desire to see every individual’s ability to shine.

Overcoming her own health challenge after being diagnosed with a rare medical condition KJ utilised her well-publicised Self Help mantra and expertise that had been perfected during her years of advising viewers to help regain her health and restore her physically and mentally.

Kylie has successfully published more than ten books winning awards along the way.  KJ was awarded the Australian Print and Publishing Awards for Best Innovation: Books and Best Full Coloured Books.  KJ has plans for further books including a self-improvement/growth book to be released late 2016.  KJ’s work has been profiled across many platforms and publications including Australia Women’s Money, Natural Health Magazine and The Sydney Morning Herald Weekend Magazine in Australia. A passion for travel has allowed KJ to travel the world and visit people across the globe.

Kylie has the passion to deliver engaging, informative and interactive presentations.  KJ’s skills have been utilised to MC, host and deliver keynote addresses to a broad range of audiences. 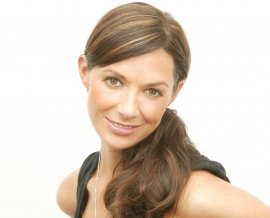