Paralympian, champion and NSW Australian of the Year 2019

Born and raised in the small western suburb of Carcoar in New South Wales, Kurt Fearnley is a man with great determination and courage.

Born without the lower part of his spinal cord, Kurt always knew he was different but that didn’t stop him from anything, including playing football and travelling along the Great Wall of China.

In his teens, Fearnley turned to wheelchair sports as an outlet and became a world beater, playing better than anyone else in the field. He took part in multiple Paralympic games including the 2000 Sydney where he was awarded two silver medals as well as the 2004 Athens Paralympics where he took home gold in the 5000m and marathon races.

Kurt has also won five world championships, competed in over twenty marathons around the globe and taken part in three straight New York marathons. For his determination and dedication he was crowned as the Marathon Man of wheelchair sports and was able to compete and defend his gold medal in the Beijing Paralympics in 2008.

Representing numerous amounts of organisations and being an ambassador of the Day of Difference Foundation and International Day of People with a Disability as well as a board member of Australian Volunteers International, Kurt enjoys making a difference in people’s lives especially those with disabilities or disadvantaged backgrounds. He also is a qualified Physical Education teacher and utilises his skills by travelling throughout New South Wales teaching high school students.

In 2009 these triumphant achievements saw Kurt earn the 2009 New South Wales Young Australian of the Year.

In 2018, Kurt was appointed an Officer of the Order of Australia or AO, for his distinguished service to people with a disability, for his fundraising efforts when it comes to Indigenous athletics and charitable organisations, as well as his achievements as a Paralympic athlete. He was also recently named as the NSW Australian of the Year 2019.

Kurt’s presentations are beneficial to inspire and encourage individuals and audiences to never give up and to always keep going forward.

Kurt was fantastic! He was soo lovely and easy to work with on the lead up to the event and then on the day he blew everyone away. Very down to earth with an unbelievable story that really makes you take a look at your own life and blessings.

Amazing audience response. He received a standing ovation. Highlight of our conference

You could have heard a pin drop with an audience of 400. Moving story, great guy, would have him back again. Highly recommend him, very inspiring

Kurt is warm, engaging, funny and inspirational. Without a doubt, he is one of Australia’s most focussed and exceptional athletes – his list of achievements speaks for itself. Despite this, he is supremely modest and unassuming. From the moment he ‘rolled’ up onto the stage, we were captivated, inspired and amused. Kurt left us all in a better place and motivated to achieve. We could not have found a better speaker for our conference.

Fantastic, the response was appropriate and certainly helped cement out key conference message. The way Kurt blended stories and experience made it simple for delegates to connect and contextualise the message to their own circumstance 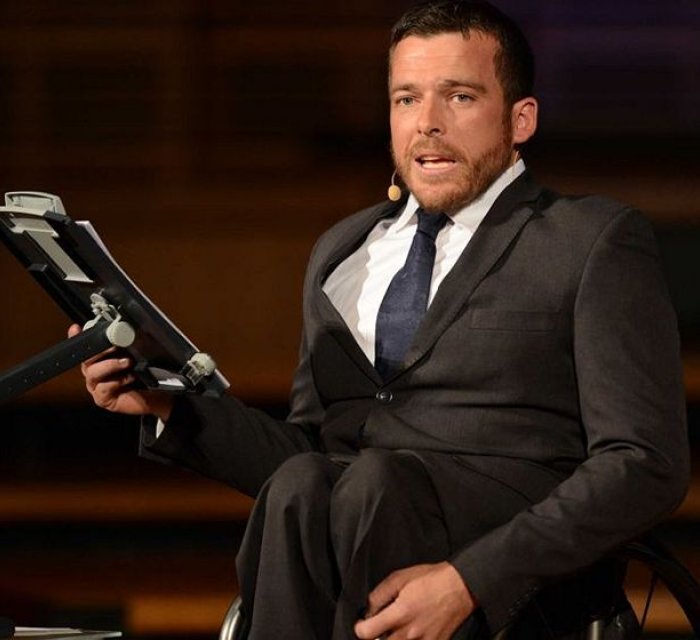