The first woman to sail solo, non-stop and unassisted around the world

As the first woman to sail solo, non-stop and unassisted around the world, Kay Cottee has a remarkable story to tell. She is an incredible motivational speaker who encourages everyone to aim for their dreams and ambitions.

Her voyage covered over 22,000 natuical miles, and saw Kay spend 189 days alone at sea, facing winds of over 80 knots. The yacht used in the trip, Blackmores First Lady, now resides on the Maritime Museum in Sydney. Her trip saw her raise over $1 million for the drug and alcohol prevention charity, Life Education.

Kay has authored two books, 'Kay Cottee - First Lady' and 'All At Sea On Land'.

She has served on the Board of the Australian Maritime Museum for 11 years, spending the last 6 years as Chairman. Kay has also served on other boards and is patron of several charitable organisations.

Travelling across the globe, Kay is a successful motivational speaker and delivers a powerful presentation to demonstrate how audiences can reach their goals and make their dreams come true. 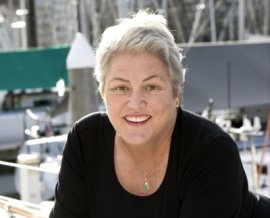