Hear an incredible story and stay safe behind the wheel

John Maher’s inspirational story comes from a place of personal tragedy. His story covers a routine subject with a personal spin, moving an audience and allows them to appreciate life with a new meaning.

Starting out in insurance, John enjoyed his career and led a successful one, before it was all taken away in a matter of seconds. A horrific accident occurred with John being involved in the midst of it all and the life of an 18 year old girl was taken. The crash, although not being John’s fault, classed him as unemployable at the age of 42 and left him with years of rehabilitation and counselling to follow. With the assistance of doctors and his family, John slowly worked hard at recovering mentally and physically.

A mere thirty months after the crash, John’s world came crumbling down when the youngest of his four daughters, Carmen, was killed in a car accident at the age of 18 after experiencing fatigue behind the wheel.

With a background in insurance and banking industries, John started his campaign to change the mindset of insurance advisors who don’t put enough emphasis on risk protection for the clients that rely on their advice. John believes that income protection is most valuable for any family especially when an incident occurs and the main source of income cannot attend work.

John attends businesses, as well as schools to spread the message about the dangers of car accidents and fatigue behind the wheel. His story inspires both students and employees alike, motivating them and sends out a road safety message.

Nominated for the National Australia Day Council ‘Australian of the Year’ in 2013, 2014 and 2015, John’s message is one that everybody should hear and take away from. His presentations are confronting and personal, as well as being factual and informative. He reminds individuals to stay safe whilst driving and that fatigue can affect anyone at any time of the day. 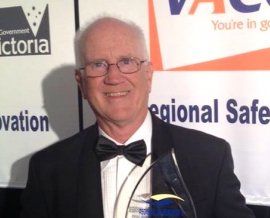