Jeremy Scott - Round the World Cyclist

Jeremy Scott’s story is one of incredible motivation, which will leave audiences feeling inspired and willing to overcome any challenge they may encounter.

As a young child, Jeremy never pictured himself lying in a hospital bed awaiting life-altering open heart surgery. Yet in 1977 he found himself in that vulnerable position and his life was put into the skilled hands of cardiologist Sir Brian Barratt-Boyes.

Thirty four years later, Jeremy realised how close he was to death and that he had been given a second chance at life, and as a response he decided to cycle unaided around the world. He pedalled more than 51,916 kilometre crossing 29 countries in his journey from London to Auckland.

As he navigated different countries the shock of weather changes, from -20oC to over 50oC, made his rides harder. As well as dramatic temperature changes, he braved wild weather including blizzards, sandstorms, floods and typhoons. He also had innumerable restless nights camping in the habitats of wild wolves, bears, dogs and crocodiles. Still this didn’t deter him from his ultimate goal, to prove to himself just how lucky he was to be given a second chance.

In the duration of the trip, Scott found himself in unusual situations that he wouldn’t have ever prepared for. From fighting with a camera stealing Shepard in Uzbekistan to being interrogated by Iranian military waving large weaponry in his face thinking he was a spy, his tales of adventure indicate strength both mentally and physically. He also had two terrifying encounters with the Iranian and Filipino Mafia, where he found himself calmly and methodically plotting the murders of individuals in order for his own survival – fortunately he did not need to kill anyone.

After two years and seven months pushing himself to his absolute limit, his journey came to an emotional end in his hometown of Auckland. Jeremy’s extraordinary journey would not have been possible if it weren’t for the brilliant cardiologists who enabled him another chance at life.

Jeremy Scott uses his story to remind audiences that if they have courage and believe in themselves than they have no boundaries. His incredible story is one that is not easily forgotten and will remain with individuals long after the conclusion of the presentation. 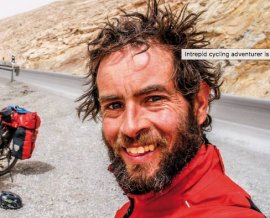