Widely considered to be the greatest female distance swimmer in history, Janet Evans is one of the most requested female keynote presenters nationally. She is a passionate individual who is happy to speak to any audience and inspire them to pursue their dreams and achieve their goals.

In 1987, at the mere age of 15, Janet burst onto the international swimming scene. She broke world records in the 400m, 800m and the 1500m freestyle competitions.

A year later, at the 1988 Olympics in Seoul, Janet won three gold medals, in the 400m freestyle, 800m freestyle and 400m individual medley. Her 400m freestyle victory saw her win it in world record time.

In 1992 in Barcelona, Janet defended her gold in the 800m freestyle and added a silver in the 400m freestyle.

At the 1996 Atlanta Olympics, although Evans did not receive a medal in the two events she competed in, the highlight of the event consisted of her handing the Olympic Flame in the Opening Ceremony to Muhammad Ali. At the end of the Atlanta Games, Janet retired from the sport.

Within the duration of her career, Janet broke seven world record in three events, the 400m, 800m and the 1500m freestyle. Her 1500m record stood for 20 years, her 800m record for 21 years and her 400m record for 19 years, which were some of the longest standing records in swimming history.

In 2010, Janet set out to achieve a goal of competing at the Olympics Trial in 2012 for both the 400m and 800m freestyle. At the age of 40 and after successfully qualifying for the trials, she was honoured with trying out for the Olympic team in both events in 2012.

Janet Evans is a popular speaker who has spoken at the request of several large companies across multiple industries including technology, healthcare, real estate, telecommunications, apparel, baking, insurance, not-for-profit as well as many other. She uses her inspirational story to engage audiences and encourage them to overcome challenges to honour their goals. She invites audience members to laugh, cry and cheer with her as a way to make them remember her presentations. 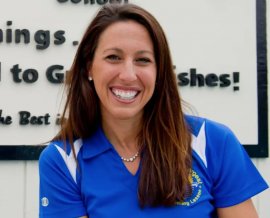