NSW Australian of the Year for 2020

As a first year resident A/Prof Al Muderis was forced to flee Iraq as he refused Saddam’s regime brutal orders to surgically remove the ears of soldiers who had escaped from the army. He was forced to flee his home country, travelling on a leaky boat, abandoned by the skipper and packed in with 165 other people, to Christmas Island.

Munjed was sent to Curtin Detention Centre in Western Australia, which became known as the worst facility of his kind. Munjed was stripped of his identity and assigned a number. For the next ten months, he would be known only as 982.

Munjed describes the centre as 'hell on earth'. He spent a lot of time in isolation and was repeatedly told to go back to Iraq. When he questioned the treatment of refugees within the detention centre, he was sent to prison, which he believed was a paradise by comparison. When the processing of refugees at the centre began, number 982 somehow slipped through the system: for forty days, which he spent in isolation, Munjed Al Muderis did not exist.

Finally released in 2000, Munjed went on to pursue his dream of becoming an orthopaedic surgeon. In 2004, he was accepted into the Australian Orthopaedic Training program, and he obtained his surgical fellowship in 2008. Today he is one of Australia's most respected orthopaedic surgeons, at the fore of ground-breaking advances in orthopaedics and prosthetic limbs. His pioneering technology has been used to enable amputees to live more mobile lives, giving Australian and British soldiers who have lost their legs the ability to walk again.

Munjed commenced his private practice in 2010 and specialises in hip, knee, trauma and osseointegration surgery. He is a clinical lecturer at Macquarie University Hospital, a Fellow of the Royal Australasian College of Surgeons and Chairman of the Osseointegration Group of Australia. In 2014, he published his memoir Walking Free with Allen and Unwin.

Dr Munjed has been named NSW Australian of the Year for 2020. 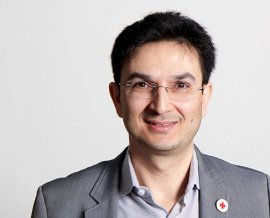