Devon Harris captained the Jamaican bobsled Olympic team in 1988 in Calgary, Canada and he is a 3 times Olympic champion.

Devon was raised in the violent ghetto of Kingston, Jamaica, and at a young age decided on adopting a positive attitude and believed it would serve him more purpose than a sense of injustice and a heart filled with anger.

Devon was a graduate from the prestigious Royal Military Academy Sandhurst in England and received a Queen’s Commission in December 1985. He served as a Captain in the officer corps of the Jamaican Defence Force, where he retired in 1992.

Devon has learned the power of persistence and the obstacles that people face in order to live their best life. Devon’s mission remains the same no matter who he is interacting with- to bring the message of how everyone can keep on pushing and working for their dreams everyday of their professional and personal lives.

The Jamaican bobsled team inspired the Disney blockbuster movie Cool Runnings. Devon founded the Keep On Pushing Foundation on 2006 which aims at supporting and enhancing the education of kids from disadvantaged communities by providing them with practical solutions to the challenges they face in getting an education.

Devon has gone on to write books which highlight the obstacles in his life and is now an in demand motivational speaker.

When looking for a motivational speaker for our first virtual company meeting I have to say I was feeling slightly nervous about how a motivational speaker would work virtually – would we get the same presence, excitement and inspiration that we get from speakers when we meet in person? With Devon Harris I have to say the answer is YES! Devon is a fantastic speaker – his talk was motivating, engaging and humorous and most of all it was memorable. His story is truly inspirational and the life lessons pulled through from his experience have stayed with us beyond the presentation. In fact he is often quoted by employees in other meetings since we heard him speak in January! The feedback from those that heard his presentation was amazing and I would absolutely recommend him to speak at any company engagement. 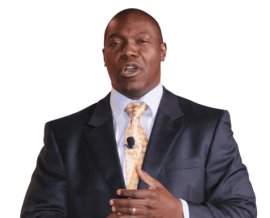