In 2010, Dan Keighran was deployed for a second time in Afghanistan on Operation Highroad. On the 24th of August that year, his patrol came under fire by an insurgent force which resulted in a friendly casualty. Subsequently, Dan was forced to act – he risked his life and purposefully drew enemy fire to himself and away from the rest of the members of his patrol who remained focused on extracting the wounded. This situation lasted for over three hours and allowed Dan’s teammates to withdraw the wounded man. As a result of his bravery in the face of adversity, Dan received the Victoria Cross – the first and only to be awarded to a Royal Australian Regiment Soldier. Receiving a Victoria Cross requires ‘the most conspicuous acts of gallantry and extreme devotion to duty in action in circumstances of great peril.’ Dan is one of ten living recipients worldwide.

Enlisting in the army was the first thing Dan did after finishing High School; he was posted as a rifleman to 6RAR based at Enoggera in Brisbane soon after completing recruit and infantry training – he did all of this before he turned 18.

Dan’s experiences are vast and far reaching. Having been deployed on operations to Afghanistan, Iraq and East Timor, his depth of knowledge of working in such challenging environments and working in tandem with multiple agencies in groups small and large lend him an extremely unique perspective on the nature of goals, teamwork and success.

In 2011, Dan exited full-time army service and commenced work in the mining industry, first in WA and then in Kalgoorlie. Dan returned to Queensland, his hometown, in 2015 where he explored new employment options and began study at QUT. As of now, he has his MBA and has maintained his connection to The Australian Defence Force by taking up a career within the defence industry. Dan also donates his time as an Ambassador for Mates4Mates, supporting Australian Defence Force members who suffer from PTSD and physical conditions as a result of their service.

Dan’s deep understanding of high-risk environments lend him a highly valuable perspective on communication, planning, teamwork and the nature of high stakes decision making. Dan sees an abundance of links easy to draw between business and military leadership and seeks to share his unique approach to corporate culture and safety culture. 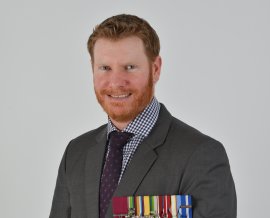